Pony rescued after being found neck-high in mud in Tilbury

RSPCA officers and firefighters launched a rescue mission to free a pony who was stuck neck-high in mud in a ditch over the weekend.

Essex Fire & Rescue Service and the RSPCA were called to a field off Marshfoot Road in Tilbury on Saturday afternoon (19 January) after a member of the public spotted the little grey pony stuck at the bottom of a deep ditch. 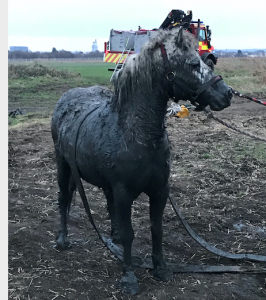 RSPCA Inspector Caroline Richardson said: “It’s amazing that she was spotted as she was absolutely covered head to toe in mud and was neck-high in muddy water. You could just see her ears – which were the only part of her that were still grey.

“It’s total chance that she was found and she was very lucky to have been spotted.

“She was freezing cold, shivering and clearly exhausted. We believe she may have been stuck in the ditch for days and, with the weather having turned so cold and wet, I don’t think she’d have survived much longer. She’s a very lucky little pony!”

The little Welsh pony – who staff have named Puddles – had apparently been straying in the area for three months. Staff believe she’s around 15 and are appealing to find her owners. 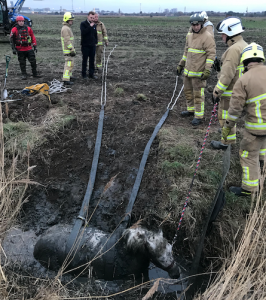 Fire crews managed to winch her up and out of the ditch before she was taken to vets for a check-up and a bath.

Puddles, who is around 11hh, isn’t microchipped so the RSPCA is now trying to trace her owner in the hopes of reuniting her with her family. 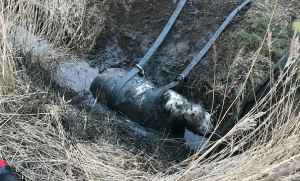