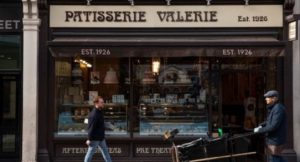 PATISSERIE Valerie has collapsed into administration , putting almost 3,000 jobs at risk. The firm said discussions with its lenders HSBC and Barclays to extend a standstill agreement on its debts had come to nothing, leaving it with no option but to appoint KPMG as administrator. Its parent company Patisserie Holdings has been grappling with the fallout of an accounting fraud.

The cake chain failed to secure finances from banks, one week after admitting it was in worse shape than initially thought (Picture: PA) It said this evening: ‘Patisserie Holdings plc announces today that, as a direct result of the significant fraud referred to in previous announcements, it has been unable to renew its bank facilities, and therefore regrettably the business does not have sufficient funding to meet its liabilities as they fall due.’

Patisserie Valerie trades from about 200 cafes. Chairman Luke Johnson has extended an unsecured, interest-free loan to help ensure that the January wages are paid to all staff working in the ongoing business, the company added. The loan will also assist the administrators in trading as many profitable stores as possible while a sale process is undertaken.

Last week, Patisserie revealed KPMG had been hired to carry out a review of all options following the accounting scandal which pushed it close to collapse last year. It also unveiled the ‘devastating’ extent of irregularities in its books, which included thousands of false entries into the company’s ledgers. The firm said an initial investigation pointed to cashflow and profitability being worse than previously thought when the problem was first discovered in October.