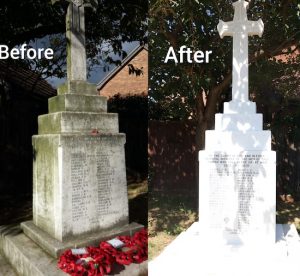 HISTORY Society member Brett Goodyear gave us a personal review of The Great War, the last of our series of talks on World War 1, in memory of those by the late Jonathan Catton.

Brett told us he first got involved in family history after researching his mother’s family tree. His grandfather was stationed on the T.S. Exmouth before and after the war, retiring as a shipwright. However, his interest in WW1 started with a relative who died during the Battle of the Somme.

Six million men were mobilised at the start of the war on 4 August 1914 when Britain declared war on Germany. Three days later Essex troops arrived in France, one of the first battalions to arrive; they moved to Belgium and 23 August was the first major battle at Mons. Orsett Hall’s owner Major Whitmore was second-in-command of the Essex Yeomanry and served in France with the Royal Horse Guards, surviving severe wounding.

The British retreated to Paris; the Battle of Marne followed, the Germans retreating. Then there was the ‘race to the sea’, trying to outflank the enemy, with various battlefields concentrating on the Western Front. Casualties were enormous, nearly 20,000 British soldiers being killed on the first day of the Battle of the Somme; however, the French lost twice as many men as we did in the war. More than 70 Generals died in WW1, but they never left the chateaux, a long way behind the British lines. We had few aeroplanes, only 113 at the start of the war.

The Defence of the Realm Act came into force at the beginning of the war, restricting public house opening hours and banning the buying of a round of drinks. Further restrictions came into force including blackouts and post and press censorship. British summertime was introduced in 1916. Apparently there was a shortage of of shells in 1915 and we had to pay royalties to Germany for the fuses! Brett told us about prime ministers who served: Harold MacMillan was wounded three times, Clement Atlee survived Gallipoli and served on the Western Front. Churchill was blamed for the disastrous Gallipoli campaign and resigned in November 1915.

There were also some heartening stories. When the RN Live Bait squadron was torpedoed a 15 year-old dived overboard, was picked up and torpedoed twice more; however he lived to the ripe old age of 90. Another survivor was Violet Jessop. She came through the sinking of the Titanic and worked on the hospital ship Britannia; it was mined but again she was one of the 1000 survivors.

Medical advances in WW1 included person to person blood transfusions and mobile X-Ray units, with over a million men being helped. Also the first skin and bone grafts were carried out in the army’s surgery unit. War poet Wilfred Owen died 4 November 1918 and the plaque at Sambre-Oise includes his name.

The armistice was signed at 5am on 11 November 1918. About 11,000 soldiers died on that day – killed in combat, through wounds and the Spanish flu. The first British soldier died on 21 August 1914, the last one two minutes before the armistice was signed. The Paris peace conference was held on 18 January 1919, culminating in the Treaty of Versailles which was signed on 28 June 1919, Germany being forced to accept responsibility for the war.

This was a poignant reminder of what our forebears had to endure and the terrible loss of life.

Our next meeting is at 8pm on Friday 15 February at the Adult Education Centre in Richmond Road, Grays, when we see the return of Linda Rhodes, giving an illustrated talk on Ghosts and Graves in Barking and Dagenham. Visitors are welcome.