MEP Tim Aker resigns as councillor for Aveley and Uplands 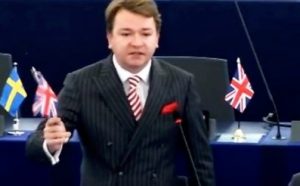 TODAY Tim Aker has notified the Chief Executive of his decision to resign as Councillor for Aveley & Uplands.

“I have taken this decision for two reasons. Firstly, the crisis created by the shambolic handling of Brexit has forced me to spend almost all of my time at the European Parliament. Whilst I have always been able to assist residents via email, phone and house visits, important voting meetings and Brexit debates during the week in Brussels and Strasbourg, have prevented me from being able to fulfil all of the other duties that the role of Councillor demands. Secondly, I moved out of the borough last week and I do not believe that it is right for me to continue as a Councillor at Thurrock Council.

“As a result, and with a heavy heart, I have decided that I must resign. I love Aveley and Uplands dearly. However, the residents of Aveley, Kenningtons and the Uplands, my friends and neighbours, need a Councillor who is able to give them the time that they deserve. I will of course continue to support my dear friends within the Thurrock Independents.”

Thurrock Independent Party Leader, Cllr Luke Spillman said: “I fully understand Tim’s reasons for resigning. I’m extraordinarily grateful to him for his effort, determination and friendship. He should be incredibly proud of donating all of his Councillor allowances to charitable and community projects across Thurrock.”

A Notice of Vacancy has been published for the Aveley and Uplands Ward following the resignation of sitting councillor Tim Aker.

A by election to fill the vacancy will be held within 35 days of the required notice being given to the Returning Officer in writing by two electors from the borough of Thurrock.

More information can be found on the council’s website at: thurrock.gov.uk/elections