A THUG has been jailed for ten years for punching and kicking a woman who had gone to his aid because she thought he was unwell.

The taxi driver had seen John Eggleton-Thompson slumped at the wheel of a Ford Focus at Southernhay, Basildon, in the early hours of Saturday 8 December last year. 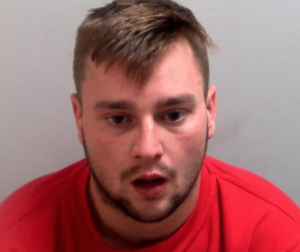 She called 999, went over to the car and opened the driver’s door. She took the keys from the ignition, believing he was not fit to drive.

Eggleton-Thompson became aggressive and punched her in the head, causing her to fall to the ground.

He demanded his keys back, which she gave him.

He then kicked her in the head and walked away before running back towards her, and kicking her in the hip, face and head.

He left her lying in the middle of the dual carriageway and drove off.

A member of the public went to her aid and emergency services arrived.

The 58-year-old woman was taken to hospital with a hip fracture and bruising and swelling.

Officers searched the area and found the Focus in Runwell Road, Wickford.

Eggleton-Thompson was again slumped over the wheel, but drove off when he saw them. They attempted to stop him and he rammed a police car, pushing it out the way.

He eventually stopped in White Elm Road, Bicknacre, and tried to run off but but was arrested.

The 24-year-old of Mill Lane, Grays, was charged with causing grievous bodily harm, dangerous driving, failing to stop for police, and failing to provide a specimen for analysis.

He appeared at Basildon Crown Court on Monday 11 February, where he admitted causing grievous bodily harm with intent (GBH), dangerous driving and failing to provide a specimen for analysis.

Eggleton-Thompson was jailed for nine years for GBH and one year for dangerous driving, to run consecutively.
He was banned from driving for eight years and ordered to pay £170 victim surcharge.

No separate penalty was made for failing to provide a specimen, however his licence was endorsed.

“The judge recognised how she had acted with incredible public spiritedness and courage.

“She could easily have driven past without stopping, but was concerned for the driver’s safety and that of other people should he continue to drive.

“The sentence handed to Eggleton-Thompson reflects the brutality of the attack and I hope it gives her some comfort that he will remain in prison for a significant amount of time.”

The judge recommended the victim be commended by the High Sheriff and rewarded with £500.
GO TO TOP