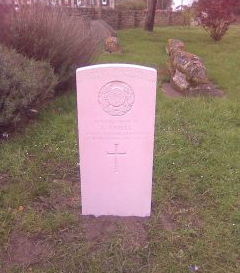 THE fighting in the Great War ended more than 100 years ago, but participants in that war are still being recognised. Sometimes bodies are recovered on the former battlefields of France and Flanders, but discoveries are also made closer to home. In 2012, a new Commonwealth War Grave headstone was erected in Chadwell churchyard in memory of Stanley Ansell who died in 1919 and is buried in the churchyard, althFirst World War CWG headstone erected in March 2012 | John Matthewsough the exact location of his grave has been lost due to imprecise records.

The CWG has also now agreed to erect a Special Memorial, to Gunner Alfred William Ansell in Chadwell churchyard. It will be inscribed with his name, rank and number, date of death and his regiment. At the top, it will be inscribed “KNOWN TO BE BURIED IN THIS CHURCHYARD”

Alfred William Ansell was the son of William and Catherine Ansell of Tilbury and husband of Emmie Ansell of Paddington, London. He was a reservist who was mobilised in August 1914 and served in the Royal Garrison Artillery. He saw active service in the BEF for about 18 months. He was discharged in March 1916 as no longer fit for active service and died on 31st July 1917, aged 30.

This belated recognition is due in no small measure to Geoffrey Gillon, who has worked hard to persuade the CWG that Gunner Ansell deserves a memorial. Geoffrey is a volunteer with the “In from the Cold” project which is dedicated to recognising the sacrifice of the thousands of men and women who died in the service of Britain and the Commonwealth during two world wars and yet have no official recognition.