The Sound of Burt Bacharach set to come to Tilbury

A MUSICAL night paying tribute to the music of Burt Bacharach is set to come to Tilbury.

The show is called ‘Because It’s A Lonely World’ (A Musical Tribute To Burt Bacharach) and is taking place on Friday March 29th, at the Tilbury Community Centre at 8pm. 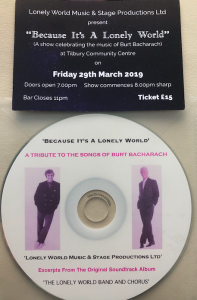 The show will feature a band of seven musicians and seven singers, and will feature projection images as well as vintage footage.

Burt Bacharach is one of the greatest composers of all time and has been writing hit singles since 1958.

He has won a number of Grammy’s as well as Oscars for his work. He still tours today, at the age of 90.