BUGLIFE is appalled at the announcement that the Secretary of State has granted permission for the Tilbury 2 project which will see the Port of Tilbury expand and destroy one of the UK’s best brownfields for invertebrates the pressure group claim. 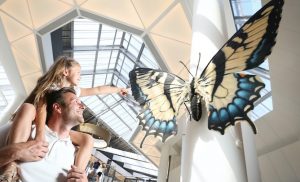 This outstanding assemblage and the unique habitats which support it may be lost for ever. This threatens the long-term future of the nationally important invertebrate fauna of the Thames Gateway, which supports brownfields long-known to offer unique opportunities for rare and threatened species. The scale of expected loss motivated 75,000 people to sign a Buglife led petition to save the wildlife on the site. This public outcry hasn’t stopped the project being given the go ahead.

“In the aftermath of last week’s report on global insect declines yet another nationally important brownfield site for bugs is being destroyed due to inappropriate and thoughtless development of wildlife sites” said Jamie Robins, Buglife’s Projects Manager. “Buglife is disappointed that once again, a site of SSSI quality is going to be lost while Natural England stood by without acting to protect it, like an ostrich with its head in the sand. Unless Natural England step up and fulfil their duty to protect our best wildlife sites, we are going to continue to lose our precious invertebrate species.”

This decision follows the recent media focus on global invertebrate declines as a result of wide ranging human activity, including habitat loss and fragmentation. With a background of continual losses of nationally important brownfields, as revealed by Buglife’s ‘State of Brownfields in the Thames Gateway’ report, Buglife wants to see more action to protect the sites supporting some of our rarest and most threatened invertebrate species.