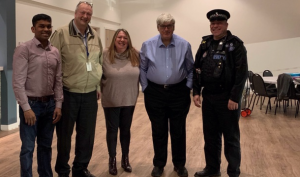 It was mentioned that some house insurance companies provide discounts for residents that are part of NHW.

Srikanth Panjala Aveley NHW Coordinator, spoke passionately about how we as residents need to play their part in helping to protect our communties and by looking out for each other helps. Srikanth himself has personal experience of his own property being the subject of a burglary. This is what prompted him to think about what he could do as a resident to help other residents and joined the NHW team. He has been a campaigner since joining and encouraging other residents to join NHW too. Srikanth went on to say with the Police stretched to the extreme we as residents have to do our bit too.

Aveley & Uplands ward Community Police Constable Neil Brand was also at the meeting and answered questions from residents relating to crime in the local area. Neil Brand expressed that there was an event on 4th February 2019 called “In Your Street” held at different locations throughout the day in the Aveley and Uplands ward. He also advised that he had been working on HGV movement through Aveley and on 6th February 2019, 12 officers took part in operation Otter where 3 HGV’s were stopped and dealt with appropriately. He had also been working on Nuisance Motorbikes and on Sunday 17th February under operation Caesar there were 4 Section 59 warnings issued, 1 Fail to stop, 2 careless driving and a vehicle removed.