A DEVELOPER has submitted an application to build more homes in Stanford-le-Hope – despite an application for 47 homes nearby being thrown out after more than 500 objections were submitted.

The planning application from DAP Architecture on behalf of the Harding Group outlines the construction of 19 new homes on Billet Lane, Stanford-le-Hope. 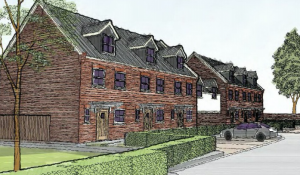 Most of the homes will be three bed houses but it will also include four two bed homes and two four bed homes.

In planning documents, the DAP Architecture states: “The application provides an ideal opportunity for housing for those seeking to live in Stanford-le-hope, with increased visual interest along Billet Lane.

“The comprehensive high-quality design appears in-keeping with the scale and massing of the immediate surrounding context, while providing an opportunity to enhance the aesthetic quality of the site and contribute towards the overall character of Stanford.”

It also details the development’s proximity to Stanford-le-Hope Primary School, which it says would be “of great benefit to any young families”, and Hassenbrook Academy which is within walking distance.

However, residents are likely to be concerned about the possibility of new homes considering an existing strain on school places and health services.

An attempt to address the shortage of school places fell through when the Department of Education failed to complete an assessment that would have allowed the Thurrock Rugby Club to be transformed into a temporary school that would have offered 120 places in September.

Thurrock was also called one of the most “under-doctored boroughs in the country” in September last year, with just one doctor to every 2,700 patients.

Two weeks ago, the council’s planning committee rejected a plan to build 47 flats on a car park in King Street in Stanford-le-Hope after receiving more than 500 objections.

While most focused on the potential loss of parking, many also said they were concerned that the homes would cause overcrowding in a town that already struggled for doctors, dentists and school places.

One Response to "More homes proposed for Stanford-le-Hope"