AN apprentice from Basildon is calling on local people and his fellow colleagues to pursue the career they have always wanted by applying for an apprenticeship during National Apprenticeship Week 2019. 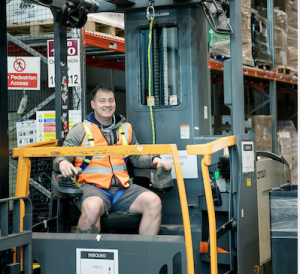 Nick Hart (30) from Basildon is an Operations Apprentice working at Amazon in Tilbury.

Nick started his apprenticeship with Amazon in 2017 and is working towards a qualification to become an Operations Team Leader after two years of training and study with Amazon.

Nick is also encouraging his fellow Amazon employees to pursue qualifications and training in their dream career by applying for the Amazon Apprenticeship Programme.

The apprentices will join Amazon’s world-class Apprenticeship Programme, where the courses typically run on average for three years and are fully funded by Amazon and mix theory and work-based training.

“A great thing about the Amazon Apprenticeship Programme is the variety of the role. First thing in the morning, we have a brief with the team and manager about what is coming into the building and what needs done. We get a checklist and then we get to work. We pick, stow and send products around the building. After that, we’ll get involved in a lot of operational activities, getting things from point A to point B. Part of the apprenticeship is working in lots of different areas, and you can move around every three or four months. We get to choose which department we want to stay in. I’m going to staying in the Inbound Dock.”

Speaking on his favourite thing about the apprenticeship so far, Nick said: “I enjoy learning from lots of different people and the aspects of how they work; how Amazon works. It’s really streamlined – I love organisation and this is the ultimate place for that. There are many people that I’ve learned from who are also doing an apprenticeship. We help each other and guide each other throughout the process.”

For anyone thinking about applying for a place on the Amazon Apprenticeship Programme, Nick has some advice. “Go for it – it is a way to better yourself. It’s not a hard job, but it’s very rewarding when you succeed. You feel accomplished and that you’re making a difference. You can do things that you didn’t think you could do and learn things that you didn’t think you could learn. It’s also great because you can apply your learning to everyday life.”

During National Apprenticeship Week 2019, Amazon has announced the creation of 1,000 new apprenticeships for new and existing employees in fulfilment centres and development centres across the country.

Starting on 4th March, opportunities will be available to join apprenticeship schemes in Operations, IT and Engineering.

Amazon’s Apprenticeship schemes are designed to suit candidates with a range of experience, from those with life skills to school leavers who are 18+ with GCSEs or A-levels.*

Anyone interested in finding out more information about the Amazon Apprenticeship Programme can visit www.amazon.jobs/apprentices