THE leader of the council has refused to cancel plans to spend £10 million on new council offices and has claimed it will be an “inspiration” to other businesses.

Council leader Rob Gledhill was questioned about the plans by Labour leader John Kent during a full council meeting on Wednesday night, specifically how it will be a benefit to residents. 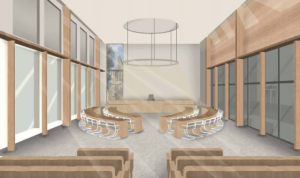 Mr Gledhill accused the leader of the opposition of failing to “see the bigger picture” and said among the benefits for residents would be rooms they can hire, an improved registry office and ceremonial gardens.

He said: “It will be providing a modern, public facing, community-focussed, fit-for-purpose building for residents and visitors that come to Thurrock.

“Provision for new multi-functional spaces for social use and hire to the community, including a new café, registry office and ceremonial gardens so those people that wish to get married at the registry office have a much nicer vista when it comes to their photographs and when enjoying one of the happiest days of their lives.

“There will also be areas set aside for those who become homeless and waiting for temporary accommodation, to wait with dignity and store their belongings. There will be other rooms set aside for residents to engage with other services in private where they can again maintain a level of discretion and privacy.

“This office extension will enable us to support the economy of the town centre and provide an inspiration and leadership for the regeneration of Grays.”

Mr Kent slammed the leader for not being able to provide a “key argument” that shows how residents will benefit.

“I couldn’t really get to the core of what he thinks will improve life for the residents,” he said.

“I’ve heard an awful lot of management speak but haven’t heard a single good reason for spending £10million of council money to build new council offices. So, I ask the leader of the council to reconsider and scrap these plans.”

The council leader refused to reconsider and said that Mr Kent’s questions showed how “backwards” he is to what the council is doing.

“He asked for one reason I’ve given you plenty of reasons,” he said.

“The regeneration of Grays is something that you brought forward under your administration that we are delivering. We are delivering using £5million you put aside to do the same kind of work but as usual you think let’s fiddle with what we’ve got rather look at the bigger picture.

“This conservative administration looks to beyond the front doors that currently exist, we look at the future and how that will improve the customer experience for those that are coming in, for those that are going to have weddings and for those that need a bit if privacy in the toughest time of their lives.

“We are also ensuring we are getting the regeneration we need from outside.”