A FREEZE on council tax, more money for policing and extra investment in social care were among several budget proposals that have been approved by Thurrock Council.

Councillors voted to back the Conservative administration’s 2019/20 budget during a meeting at the Civic offices on Thursday night, making way for new investments in roads, social care, policing and major regeneration schemes. 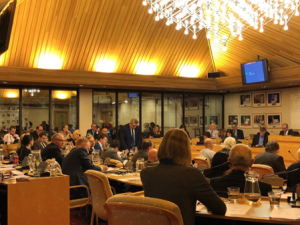 Among the capital investments is the creation of a slip road between the A13 and A126 junction, allowing traffic to travel eastbound to and from Lakeside. There will also be £1 million spent over three years on six new police officers focussed on community policing and extra investment in mental health services.

Council leader Rob Gledhill said: “In the past 33 months we have seen external pressures put a strain on an ever-decreasing tax-payers funded income from government which we have faced head on and met within budget. As a council we have received £3.3million less in direct support than we did in 2016 yet despite this, the only services cuts that have been made are those agreed in previous budgets before we took administration.”

He added: “Despite the amount of taxpayers money being allocated to us by central government being reduced by 7.3 per cent, not cuts. On top of that we are proposing a below maximum council tax increase – no just below, way below. We are proposing a zero per cent increase in the council’s portion of council tax this year.”

The freeze on council tax means Thurrock has the lowest tax rate in Essex and while this may sound like good news for residents, it has caused some controversy due to council officers recommending against it.

This is because continuing cuts made by the Government mean councils will soon need to rely entirely on council tax and business rates as their primary sources of income to protect frontline services.

Thurrock’s chief financial officer, who signed off on the budget, warned that a freeze this year could mean the council’s financial standing will become “challenging” in the long term.

He wrote in a council report that he considers this year’s budget to be “robust” but does not want that to be seen as an endorsement of the freeze. A survey on local authorities across the country recently found that Thurrock was among just three per cent of councils that are not raising council tax for their 2019/20 budget.

However, taxpayers will still have to find an extra £24 a year in council tax due to an increase by Essex Police in order to pay for 215 new officers across the county.

Labour Councillor Oliver Gerrish said: “This is exactly the kind of budget that we expect from an administration that has increased council tax by 10 per cent in two years and then tries to say they are doing people a favour by not increasing it further. It’s the same logic that cuts hundreds of police officers across Essex, then adds back a few and then tries to claim a victory, when even police officers are saying they do not have enough resources to keep Essex safe.

“The other reason this is a smoke and mirrors budget is that there is no new money to pay for this freeze. Their own medium-term financial strategy shows that while we were previously in surplus for the next five years, we’ve now opened a £1.8million deficit. There is no new investment, no new commercial income stream, no new innovative approach to finance, they are simply borrowing from tomorrow to pay for today.

“The chief financial officer has made it clear that this is not a sustainable approach and if it happens again he may no longer be in a position to sign off our budgets. We all agree we should keep council tax as low as possible for residents but to achieve that we need to generate other income. We cannot simply pay for the freeze with wishful thinking.”

Despite these concerns, councillor Gerrish voted in favour of the budget along with all other councillors in the chamber.