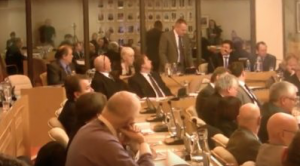 A TORY councillor has implied that the reason for a by-election in Aveley and Uplands is because the former councillor was sacked for not attending meetings, despite contradicting claims.

Independent councillor Tim Aker, who is also a Member of the European Parliament (MEP), abruptly ended his time as a representative for Aveley and Uplands at the beginning of February.

Mr Aker said the reason for stepping down was the “shambolic handling of Brexit” which had forced him to spend all his time at the European Parliament.

He also moved out of Thurrock and said he does not believe he should continue as a councillor for a borough he no longer lives in.

But since then, political rivals have claimed he was removed by the council and the leader of the council has confirmed that he had raised concerns.

At a full council meeting on Wednesday, Conservative Councillor Ben Maney asked council leader Rob Gledhill whether legislation to force a member to step down because they have failed to attend meetings over six months had been initiated.

Mr Gledhill said he could not comment on any specific cases but that he had recently highlighted concerns about a member’s attendance. He added he has “every confidence in the chief executive and the monitoring officer in this matter and I am positive the actions were taken”.

In response, Mr Maney said: “We all know now why there is an Aveley byelection. Quite frankly I would like to share your confidence in officers but have to say I am astounded that it took a member to report another member as absent.”

Before he could ask a second question he was cut short by the Mayor and chair of the meeting Councillor Barbara Rice, who called it “totally wrong that we bring these debates into this chamber”.

Thurrock Council has refused to confirm if Mr Aker was forced to step down, claiming they cannot comment on specific cases but if a councillor had breached legislation, “the relevant action would have been taken”.