MORE than 80 per cent of school children heading in to Year 7 in Thurrock have been offered their first or second preference for school places – but it is unclear how many of those places will exist come September.

In the coming months, the council will spend £1million to expand secondary schools in an attempt to create enough extra places to accommodate the 82 per cent of pupils who have been offered places. 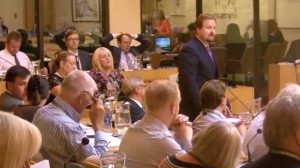 Thurrock Council has been urgently battling the shortage, which they have labelled “unprecedented” but claim that they will provide new and “permanent” facilities in time for September.

A spokesperson for the council said: “There will be secondary schools across the borough that will take bulge classes for the 2019/20 academic year only.

“These schools will have permanent additional facilities such as classrooms constructed with their school site in order to accommodate the additional children from September 2019. There will be no Portacabin classrooms.”

However, the council failed to respond to the following questions asked by the Local Democracy Reporting Service.

How will these expansions be achieved in just six months?

Will they have to follow the usual planning application process?

How many places need to be created in order to fulfill the demand?

Despite this, council documents published last week show that they will be spending more than double what they are spending on all secondary expansions to create more places at Benyon Primary School in South Ockendon.

This decision to allocate such a significant amount to a single primary school when the shortage of places lies with secondary schools is another issue the council has failed to explain.

However, they have said that the school place gap is “less significant” if considered in the context of pupils spending an extra two years at primary than in secondary and it is a gap that has always existed.

In a letter sent to media publications last month, Councillor James Halden, who is responsible for education in the borough, said: “The solution we have arrived at is as follows. We will make £1m extra available this year to expand strong local secondary schools, and fund the associated school transport costs.

“The expansions will be funded from our basic needs capital funding from the Department of Education, although the transport will bring an additional cost to the local taxpayer.”

The council had hoped the school crisis would have been addressed by a £3million scheme to convert the Thurrock Rugby Club into a temporary school that would accept 120 pupils this year and an additional 120 in September 2020.

Despite gaining planning permission at the beginning of the year, the plan collapsed when a vital assessment by Department for Education was delayed preventing work from taking place until later in the year.

The temporary school, which will be managed by South West Essex Community Education Trust, is now scheduled to open in time for September 2020. The trust says it will be a precursor to a 1,200-pupil secondary school that will open in 2023, named the Orsett Heath Academy.

It is one of three schools approved by the education secretary in 2017, with the others being the 900-place Thame Park Secondary school and 140-place special education school, Treetop Special Free School.

Mr Halden called the schools “vital and massive investment in response to having a historic problem”.

An attempt to build another 900-place secondary school on a park on Elm Road in Grays fell apart last year when the Government’s funding agency rejected the site.

The council had refused to listen to widespread opposition to building on the park for months with Mr Halden branding it “NIMBY pressure”.

He announced in November that the school would have to be built elsewhere and the Government had agreed to pay for the costs of acquiring an alternative piece of land. Further details are yet to be announced.