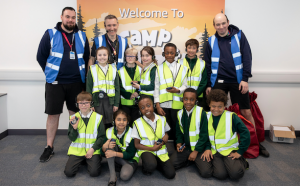 Camp Amazon, which launched in 2018 in the UK, has been accredited by the British Science Association for its contribution to the learning of young minds in STEM subjects as part of the CREST Awards programme. The workshop counts as two of eight SuperStar challenges that children can earn to achieve a CREST SuperStar Award.

CREST is a scheme that inspires young people to think and behave like scientists and engineers, while taking part in challenging and thought-provoking real-world STEM projects.

Warren Primary School took part in a week-long series of events at Amazon in Tilbury to celebrate British Science Week 2019 and started their journey to achieve a CREST SuperStar Award.

Pupils from the local school enjoyed a morning of BSA-approved activities which included a behind-the-scenes tour of the fulfilment centre and a STEM-based workshop that simulated a day in the life of an Amazon fulfilment centre.

From organising inventory lists to stowing stock and shipping customer orders, the STEM Camp Amazon offered pupils the opportunity to learn about the inner workings of an Amazon fulfilment centre and the rewarding career opportunities that STEM subjects can help to deliver.

Following the workshop, pupils had the chance to meet the team behind some of Amazon’s latest and greatest technological innovations, including Amazon Robotics.

The Camp Amazon events also saw the local school receive a donation of a £2,000 Amazon gift voucher, which will be used to purchase science equipment and books.

Camp Amazon was organised during British Science Week, run by the BSA as part of the “Amazon in the Community” programme, whereby the company supports communities in and around where it operates in the UK.

Katherine Mathieson, Chief Executive, British Science Association, said: “The British Science Association is delighted to be partnering with Amazon UK. It’s great to see a leading technology company like this supporting STEM education in the Britain. We share a commitment to boosting young people’s science capital by providing real-world, relatable activities that put STEM into context. This British Science Week, hundreds of primary school children will have the opportunity to be inspired by the innovation and systems at Amazon, and take the first steps on their journey towards a CREST SuperStar Award by participating in Camp Amazon activities at Amazon’s fulfilment centres across the UK. The workshops are based on the guiding principles of CREST: problem solving, decision making, practical hands-on activities and reflective practice.”

Amazon’s Tilbury General Manager, Prajvin Prakash, said: “Hosting these bright young minds in our building is one of a number of ways that we’re helping to unearth and inspire the next generation of STEM SuperStars. We created Camp Amazon as part of our aim to help as many young people as possible get excited by STEM subjects. We are delighted that the Amazon STEM workshop has been accredited by the CREST award programme. I hope the pupils and their teachers have enjoyed taking part in Camp Amazon and we look forward to seeing them all come back to visit us on a free public tour with their families in the future.”

Ian Broyd, Headteacher from Warren Primary School, added: “Camp Amazon has been a brilliant experience for our pupils. To have the opportunity to take part in a STEM workshop, during British Science Week, in such an innovative and technologically advanced environment is a thrill for us and we’d like to say a big thank you to everyone at Amazon in Tilbury for inviting us to their site. The opportunity for our pupils to see first-hand how STEM works in the real world was unmissable and start their journey to achieve a CREST SuperStar Award.”

During the visit, the Tilbury Amazon team also spoke to the pupils about robotics. The Tilbury site is fitted out with advanced Amazon Robotics technology. The robots slide under a tower of shelves where products are stowed, lift it and move it through the fulfilment centre. Find out more about Amazon Robotics here.