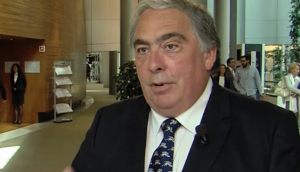 CAMPAIGNING MEP John Flack is backing a parliamentary move to use the opportunity of Brexit to end the cruel exportation of livestock.

The United Kingdom is currently governed by Brussels legislation which allows live exports of farm animals subject to some basic stipulations.

But Mr Flack and major welfare charities say the rules still subject animals to long hours of transit in unacceptable conditions. He also warns that animals sent to the EU are often transported on to non-EU states where their treatment is even worse.

The Conservative MEP for the East of England, a consistent campaigner for animal welfare and conservation, today welcomed a parliamentary amendment in Westminster which would commit the Government to a review of the UK’s live export rules within a year of Brexit.

Mr Flack said: “This is a wonderful initiative. Former minister Tracey Crouch has tabled this as an amendment to the Agriculture Bill which is setting out our planned farming policies once we are free of the EU’s dreaded Common Agriculture Policy.

“I hope many more of my Westminster parliamentary colleagues will now offer her cross-party support. Brexit is all about taking back control, and deciding our own farming and welfare standards is of prime importance.”