Thurrock knew they needed to win to secure promotion and came out ready to play some great hockey, as they have done throughout the season so far. They started strong and scored 4 goals within 15 minutes which knocked Wapping sideways. Thurrock became slightly complacent which allowed Wapping to score their first goal. Half time meant Thurrock needed to calm down and stop panicking and play the hockey we know how to play. Louise Parrott had plenty of space in the middle and some great hockey was played up the pitch from Natalie Beardwell, Katie Lawrence and Joey Taylor through to Katie Jacks to score another goal for Thurrock in the second half. Thurrock’s final goal was scored by Natalie Beardwell from another well executed short corner. 3 from Nikhol Chapman, 2 from Natalie Beardwell and 1 from Katie Jacks meant Thurrock had secured promotion into the East league next season! Player of the match Natalie Beardwell. Thurrock 1s play away at Chelmer Park next week. 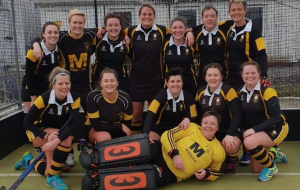 Thurrock started this game with only nine players including Mike Crawford father of youth player George making his debut. Thurrock were put under pressure from the start and Dave Leeks had to work hard to marshal his fellow defenders Jay Lamb and stand in Martin Healy and stem the Brentwood tide with debut keeper Regan Harvey pulling off a string of athletic saves. When tenth player Hayden Keeler Stone arrived midway through the half, Thurrock were able to make greater impact on the game and Callum Harvey was unlucky to see his shot go just wide after a solo run from the half way line. The game flowed from end to end with both teams having chances but being unable to convert them into goals. Thurrock came out strongly in the second half and Mike and George Crawford exchanged passes to weave through the Brentwood defence before Healy, having moved into his usual attack role, saw his shot pushed around the post by the diving keeper’s stick. With only five minutes to go a Thurrock attack led to a Brentwood player having to retire injured and from the resulting free hit, the ball was moved quickly up the field and led to a shot which was initially saved, but fell to the stick of an attacker who flicked it into the roof of the net to claim the victory.

Thurrock appear to be saving their best performances for the end of the season! Thurrock dominated this game from the beginning as Becky Osborne and Lisa Simmonds created some fine penetrating runs in the right. The midfield of Sophie Runcorn, Izzy Overy, Charlotte Mailey, Millie George and Osborne were relentless and put ball after ball through to the hardworking attackers Sally Taylor and Chloe Oakley. Taylor and Oakley went close on numerous occasions. The first goal came from a short corner as Cheryl Broadbent slipped the bell to Player of the match George who placed a perfect shot past the keeper to score her first goal for Thurrock.

Mailey ran into the goalmouth when she saw a loose ball coming her way to add a finely taken goal. The dominance was obvious to see but the score line remained at 2-0 until half time

The ladies maintained their supremacy but still no further goals seemed to be coming. A fine individual run from Osborne resulted in Taylor deftly placing the ball past the outstretched keeper.

Thurrock should be proud of this result which saw commanding performances from the younger players who are growing in confidence every game.

Having secured promotion with a victory last week against Upminster, Thurrock travelled to bottom of the league Clacton knowing a win would see them crowned champions. With that motivation, Thurrock settled into the game quickly, passing the ball around and not giving Clacton any time on the ball. They were soon ahead, Abbott scoring the first of his 4 goals, taking his season tally to 37. By half time Thurrock were 5-0 up with Liam Ross and Darren Clark getting on the scoresheet. The 2nd half saw Thurrock ease off and Clacton step up their game, with Man of the Match, Chris Smith, having to get involved in the Thurrock defence. However, Thurrock were simply too strong and Ross and Abbott scored 4 more goals, with the Clacton goalkeeper preventing the score being double figures.

Thurrock’s final game of the season is against Rochford at Palmer’s College on Saturday at 11am, with Rochford needing a victory to join Thurrock in Division 4SE next season.