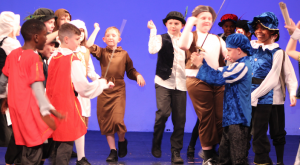 Woodside have been playing Shakespeare at the Thameside every year since 2014 as part of the national Shakespeare Schools Festival, alongside Little Thurrock, Palmer’s College and Gable Hall, but decided to go it alone this year.

Woodside Principal Edward Caines explained: “We believe the experience of acting in quality drama in a real theatre is something every child should have, not just a selected few. With three classes in a year now we needed our own Shakespeare festival at the theatre to give all our children this life-time opportunity.”

“The Woodside Shakespeare Festival has provided a great cultural opportunity for the children and we have received so much great feedback from them. They have really enjoyed the process of creating their own version of a Shakespeare play and being exposed to the Shakespearean language. The pupils were so excited at the prospect of performing the production in a commercial theatre and having a chance to shine under the spotlight. Many children who may have never performed on a professional stage have really engaged with this exciting idea. Being able to contribute their ideas to staging, lighting and design has opened their eyes to many career opportunities available in the arts.”

Each year 5 class at Woodside takes a Shakespeare play as a basis not only for literacy work but as a starting point to study life in Elizabethan England and their next step is to visit the reconstruction of Shakespeare’s own theatre, The Globe in London. Although they had an abbreviated and partly adapted text children also engaged with the real Shakespearean language, with clear benefits showing through in their own writing.