THE Women’s Storm Football Academy at USP College were announced as AoC Sport Premier League champions after a record breaking season – only losing one league game!

The team has been growing over the years and has excelled in all competitions so far this year. 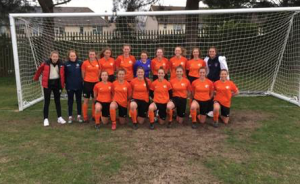 This fantastic achievement is one of many for the Women’s Academy as the team were also English Schools Cup runners up and have the AoC Sport National Finals and AoC Premier League semi-final play-offs coming up.

Head of Learning for Sport and Head Coach Craig Davidson said: “This is a landmark achievement and is a testament to all the hard work and development of the women’s game.

“To win a Premier League title is nothing more than they deserve and the team have taken the college to a new level of performance in Women’s Football.”

The college have been aiming to be champions since entering the Premier League and came fourth in 2017 and third in 2018 before dominating the league this year to become league winners.

Ellie-Marie Ashford, 17 from Canvey Island, said: “When we won we could not contain our excitement. We’re a brand new team so we didn’t know how the season would go, we’ve exceeded all our own expectations – we’re so proud of each other

“It was our teamwork and determination that allowed us to achieve this. It’s a real motivational boost so we’re hoping we can succeed in the remainder of our competitions.”

To develop the game further the Women’s Storm Football Academy will be going on a 10 day tour to the USA to play against university level clubs.

This trip will allow the students to discover new training methods as well as the opportunity to impress the coaches of the universities to try and gain scholarships.

Ellie-Marie is aiming to take advantage of the trip to Baltimore USA after completing her A-Levels in Sociology, English Literature and Sports Science at USP College.

She added: “I am looking forward to going to the USA, it is a great opportunity to try and secure a scholarship in America which is the dream.”

To be part of the Women’s Academy come along to the next Storm Academy trial on Tuesday 16 April. Book your place online at www.uspcollege.ac.uk.