A CAFE owner has said he fears for his livelihood after finding out his business will be demolished to make way for the expansion of council offices.

Angel Café on New Road in Grays is a small independent business with a reputation for friendly service and value but if the council’s plans to expand the Civic Centre go ahead, it will be demolished along with at least three other businesses. 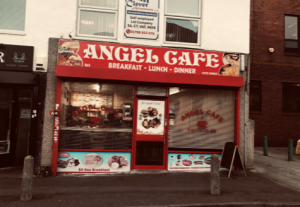 Council leader Rob Gledhill claimed during a February meeting that the plan to spend almost £10million on redeveloping the Civic Centre will make the council an “inspiration”.

When asked by the leader of Labour to explain how the community would benefit, he said the opposition was failing to see the “bigger picture” and explained that residents could hire rooms and there will be improvements to the registry office.

That “bigger picture” means little to Sadik Alakirik and his employees at Angel Café or for Mr Alakirik’s brother who manages an adjoining barbers, which is also set for demolition.

“This is my living, my life and my kids’ life, also not just my family but the people who work here. They are asking me what will happen and I can’t tell them,” he said.

“They want to knock down our shops but we don’t know anything because we are just the leaseholder.

“All we have heard is the council wants to purchase the building and they are going to knock it down. No one has spoken to us, no email, no letter, nothing.

“I just wish someone would speak to us face to face. We are next door to the council, just a one-minute walk away.”

He added that the loss of the café will mean four people losing their jobs and there will be more in the neighbouring businesses, which includes Istanbul Barber, Charcoal Grill and Dave’s Newsagents.

A Thurrock Council spokesman said: “As proposed in the Grays Masterplan in 2016, the buildings currently occupied by the shops would be required and the land incorporated into the civic offices scheme.

“Negotiations with the landowner are ongoing, and are confidential and commercially sensitive.”

They did not comment on whether building on the land would mean using compulsory purchase powers. They also declined to comment on why businesses have not been spoken to or whether any form of support or compensation would be offered to them.

The concerns have been raised just two weeks after it was revealed that the project would also mean building on a park dedicated to the memory of those who took part in D-Day.

The council has denied there is any record of the dedication, despite a plaque being on a bench next door to their office. Records from the Thurrock Gazette also confirm that it was placed in June 1994 and the council held an unveiling ceremony.