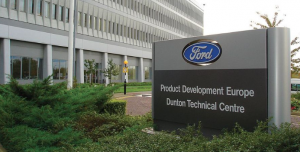 STAFF at Ford’s Dunton site are this week set to be asked to show their interest in taking voluntary redundancies – as the company moves forward with its extensive Europe-wide restructuring plan.

However staff are believed to be frustrated at the lack of information coming from senior management, who have been accused of failing to fully engage with the unions.

It is believed that at Dunton in particular, there have been several sessions spelling out the offers of special early retirements or voluntary redundancies – affecting both the hourly paid and white collar workforces.

The company is hoping to meet its redundancy target “in the hundreds” through voluntary separation deals, which are open to the whole of the UK workforce, totalling about 14,000.

It is believed about 3,000 people work at Dunton, which is also soon to welcome around 1,700 staff from Ford Credit Europe’s headquarters in Brentwood – set to close by the end of September this year.

Ford’s restructuring, which will also see it cut about 5,000 jobs in Germany, is part of a significant efficiency drive to help reverse plummeting financial results – in the third financial quarter it racked up European losses of about £190m.

The letters asking for volunteers to take redundancy has unsettled “many people” one staff member said, who added that morale is low.

They also said the lack of clarity from senior management has added to concerns.

A letter from one union representing staff at Dunton said: “The company met with staff representatives at a special meeting held on January 11.

“At that time it was felt that further meetings and consultation would begin within a matter of weeks.

“There was subsequently a trade union side meeting to begin preparing for the agenda ahead.

“However since that time little new information has been shared with us.

“The most significant event has been the announcement of a new VR/SER programme. To our knowledge the HR 1, which indicates the number of proposed job cuts to the Government, has not been issued.

“When it is issued this will be a baseline figure for our representatives to work with when trying to reach an agreement on the next steps.”

The letter said the union was “very aware” that many staff members have aspirations to leave the company.

“But as always our priority is to engage with the company on ways to minimise job losses, seeking investment and sourcing for our UK operations,” it continued.

“We now await the commencement of the formal consultation process, at this time it appears that most management teams are not yet ready to engage in this dialogue which is mandatory in this situation.”

A spokesman for Ford said: “As part of a comprehensive European business transformation announced in January, Ford is reorganising its workforce in the region.

“Within this context, on March 15, Ford offered voluntary separation programs for employees in Germany and the UK to help accelerate the plan and return to sustainable profitability.

“Through these programs and other initiatives, Ford of Germany expects to reduce its headcount by more than 5,000 jobs, including temporary staff.

“The total number of positions impacted in the UK is still to be determined.