WE may well start each ward by ward, wondering about the turnout for the local elections in May. With the public seemingly so exasperated with Brexit, many voters may well stay at home come May 2nd.

It will be a hard task for candidates, even in the Grays Thurrock ward, to keep matters restricted to ward issues.

The other two parties will have a job dislodging incumbent councillor, Cathy Kent. Former mayor Cathy Kent is one of those quiet but effective councillors that just gets on with it. She doesn’t blow her own trumpet. An example of which is probably the photograph that accompanies this piece. Cllr Kent just rolled her sleeves and got on with it. 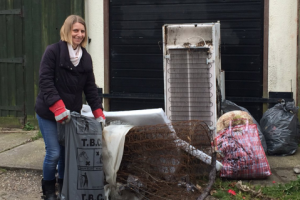 When there is an issue, Cathy speaks up. A case in point was the case of the Elm Open Space where there was a threat that the council would take away a much cherished green space.

One of the things the opposition lacks is an opposition candidate who appears to be in it for the long haul. The latest in the revolving door of Tory candidates is local businessman, James Thandi. Mr Thandi is a very personable candidate, who, in our opinion, really has the community at heart. He is part of the Grays Athletic group keen to get the team back to the area. Jimmy Thandi truly believes that the club is and has to continue to be part of the community in a whole host of ways.

The Thurrock Independent candidate is Shelby Mayes. The TI’s may benefit from the current political climate. People may just vote for whoever is not the Tories or Conservatives. The big test for the Thurrock Independents could come after this local election. If they lose more councillors, then will they have the appetite to continue.

Perhaps the keenest observer of this result will be the prospective parliamentary candidate, John Kent. He may well be checking each ward and see if the Labour numbers are holding up. You never know when there will be a General Election.