A SCHOOL in Stanford-le-Hope could get a new three storey teaching block to help address a shortage of secondary places that have put a significant strain on the borough.

A planning application to expand St Clere’s School, on Butts Lane in Stanford, has been submitted to Thurrock Council due to demand growing by around 30 extra pupils each year. 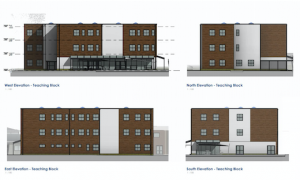 It proposes removing four temporary classrooms and constructing a new teaching block in their place. The building will be comprised of six new classrooms and four science laboratories, a sports hall and dining facilities.

The planning documents state: “The school has recently carried out a substantial reorganisation in order to provide the required teaching provision for the increased pupil numbers. This has resulted in the loss of a number of ancillary provisions including the library, staff room, pupil services, drama studio, ICT provision and pupil referral unit.

“The new teaching block will allow the removal of four temporary ‘demountable’ buildings currently situated in the same area of the school site. These are in poor condition and nearing the end of their serviceable life and it will be a significant improvement to the school to replace them with permanent facilities.

“The current catering provision is also deemed to be inadequate. Whilst efforts have been made with the new provision of catering pods around the school, there remains insufficient space and equipment to provide the required amount school dinners.

“The addition of new teaching spaces and improvement of staff facilities are required to address a current shortfall in provision. The proposal aims to create new purpose-built teaching spaces so the temporarily converted classrooms can be returned to their original use of the missing ancillary spaces.”

St Clere’s was rated “good” in a November inspection, with inspectors praising it for high staff morale, encouraging pupils to treat others with respect and strong leadership. At the time of the inspection, the school had 1,127 pupils – 27 more than capacity.

The application is the first school expansion to be submitted since it emerged that Thurrock was facing a severe shortage of school places, leaving many schools having to find space in existing classrooms to ensure all children in the borough have a place for the 2019/20 academic year.

It was hoped that a temporary conversion of a rugby club into a school, costing £3million, would bring an extra 120 places to the borough in September and an extra 120 the following year.

However, those plans fell through when a vital assessment by Department for Education was delayed.

This resulted in the council committing to spending £1million for the construction of new classrooms in secondary schools.

The South West Essex Community Education Trust will bring a new 1,200-pupil secondary school to the borough in 2023, named the Orsett Heath Academy.