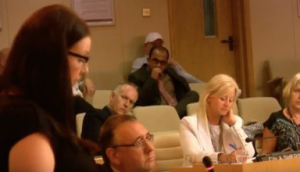 Councillor Holloway said, “Jackie Doyle Price’s comments on officer ineptitude about Purfleet regeneration are laughable. If the project isn’t moving fast enough, she doesn’t need to look any further than the weak leadership of the Tory Regeneration Portfolio Holder.

“When the MP says that local residents should just put up with the HGVs that blight our streets and not be ‘snobbish’ about them, that is a massive insult to local people. How dare she say that they should not aspire to bringing the creative industries to Purfleet? Are we somehow not good enough for anything but more lorries?

“Over the last year, I have talked to hundreds of local residents in Purfleet, along with members of the local community forum. They want this project to be pushed ahead because they need the improvements to the area like shops and more health provision to be put in place. If there are problems with the plan, they expect hard work and solutions, not carping from the sidelines. It’s time for everyone to roll up their sleeves and just get on with it.

“I should say that her comments about value for money are also staggering when you look at the local Tory council’s decision to waste a huge £10m on a new office for councillors rather than spend it making our communities better. A Labour council would put a stop to this on day one.

“Jackie Doyle Price would be well advised to get her own house in order before trying to muddy the waters on much needed improvements which residents and councillors have been fighting to achieve for years.”