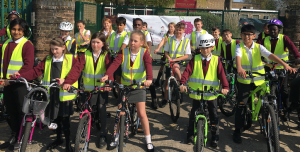 WOODSIDE Academy has been fighting its own battle against climate change by competing in the Sustrans Big Pedal competition organized by school Bike It Champion Rick Doye.

Logging their journeys to school by cycle, scooter and foot over the two weeks from Monday 25 March to Friday 5 April Woodside achieved a participation rate of 92% finishing 1st in Thurrock, 1st in Essex, 3rd in the Eastern Region, and 15th in the entire United Kingdom. This was out of a total 2,297 schools and 745,994 children who, between them, travelled 3,582,071 carbon free journeys to school.

Children also competed to be the best class and win a trip to the Olympic park cycle track and individual prizes as well as the chance to take part in year group rides to local playgrounds during the fortnight. The event finished with a whole school mile run followed by a mile cycle or scoot around nearby Orsett Heath, originally planned for Red Nose Day but was postponed due to high winds.

To coincide with this year’s Big Pedal, many schools across the UK had local council support, to close the road outside the school gates to motor vehicles. This limited the volume of traffic and helped reduce air pollution, while creating an environment in which cycling and walking is safe, convenient and enjoyable. Unfortunately this did not happen anywhere in Thurrock this year but is being suggested to the council for next time.

Woodside Bike It Champion Rick Doye said” “We have been committed members of The Big Pedal for many years and have always strived to maintain our belief in healthy and sustainable travel for our pupils. The support this year from parents and the children themselves has been outstanding once again.”

Woodside Principal Edward Caines said: “At a time when we are necessarily focussed on academic learning it was great for our children to be active in a positive way for their own health and, through the reduction of pollutants and greenhouse gases, the wellbeing of the whole community. The Big Pedal is about making the point and changing behaviour but this change obviously needs to continue long term and be adopted more widely. We need the support of local and national politicians to do this and a genuine commitment to cutting the pollution that is damaging a generation of children and the CO2 emissions that are destroying the planet”