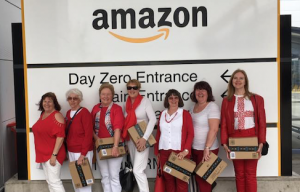 SEVERAL members have been on trips recently, in addition to the regular monthly meetings. Groups went along to performances of The Full Monty and Calendar Girls at the Cliffs Pavilion, a bit of a theme for these shows but both well performed and thoroughly enjoyable. Another group toured the Amazon Distribution Centre at Tilbury, learning how people and robots worked together to ensure parcels were packed with the correct items, an informative tour which we thoroughly recommend. As this took place on St Georges Day, members were proudly dressed in red and white, which resulted in the Amazon staff asking why and our informing them of the significance of the day. We were pleased to see the pub we’d chosen to have lunch in were also celebrating St George and chuffed to get a cheer when customers and staff spotted, we were suitably attired.

At the May monthly meeting we discussed and voted on the two resolutions that had been chosen by WI members nationally to go forward to June’s NFWI Annual Meeting.

There was some very informative statistics and input for both resolutions, members also contributed to the discussions with personal experiences. The competition relating to actions taken by members on previous resolutions resulted in several lists of how they’d reduced food waste, made attempts to stop climate change, worked on alleviating loneliness and stopped buying single use plastic along with examples of alternative items such as bamboo toothbrushes and socks, bees wax food wraps and washable make up remover pads.

After the tea break our WI Adviser lead us through this years annual meeting, the Secretaries report had us guessing what the last word of each sentence might be and the Presidents address was a show and tell thank you to all those that help make out fab WI run smoothly each month, two committee members had stepped down, they were thanked with a small gift. As a by law had been passed earlier this year capping the number of committee members to eight and ten had been nominated an election took place with independent tellers from a nearby WI overseeing the counting. Out of the eight elected, members nominated who they’d like to be President for the coming year, two of those nominated said yes so another election took place but thankfully the result was swifter than Brexit and the following members are the 2019-2020 committee – President – Jan Curtis, Secretary – Janet McCheyne, Treasurer -Mandy Nelson, Committee – Sally Wall, Jan Fawsitt, Carol Davis, Denise Wakeling, Lesley Crisp.

For the June meeting members are taking to the open road with a car rally around the local area ending up at a convenient hostelry, if you’d like to come along as a visitor please let us know so we can let you have more information on the route. This year’s programme, information, photographs & much more can be found on our website bulphanwi.weebly.com, on Facebook at Bulphan Women’s Institute & Twitter @bulphanwi or contact Secretary Janet McCheyne on 07752836902
Jan Curtis 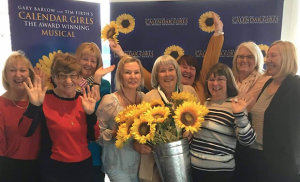