YOUNG people from across Thurrock celebrated at Civic Theatre for incredible achievements!

78 incredible young people from various districts of Essex came together to receive prestigious Jack Petchey Foundation Achievement Awards presented at the Civic Theatre in Chelmsford on Tuesday 21st May.

In addition, 11 adults were also celebrated with Leader Awards who have demonstrated, in an outstanding way, an ability to motivate young people. They received a medallion and a framed certificate.

The Essex districts in attendance have received funding of £4,663,651 from the Jack Petchey Foundation since funding started in 2007.

Danny Crates, Paralympic gold medallist said: “I have been to several Jack Petchey award ceremonies, I think they are a great way to celebrate the achievements of Essex’s young people. I am always inspired when I hear of the winners’ stories, to hear how hard working they all are and what a positive impact they have on their communities. Well done to all of tonight’s winners.”

Emily Butler, aged 12, attends Thurrock Harriers Athletic Club. Emily is always willing to try new things, which includes taking up hammer throwing! She proved herself as a team player by stepping in to run a 1500m race for the club at the last minute. 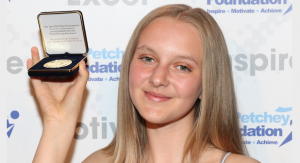 One fellow group member said of Emily: “Emily is kind and encouraging to her whole team. She is a great role model to me and my friends and she always has a smile on her face and a kind word for everyone, she is very inclusive.”

Emily decided to spend her £250 Jack Petchey Achievement Award grant on new bins for the group.

Emily said: “Winning the award is an honour to me. As an athlete people always think it’s about an individual achievement but to me it’s all about teamwork and an extended family.”

Grace Turvey, aged 13, attends Thurrock Young Carers. Grace volunteered to take part in a charity 10K run to raise money for the group. She did exceptionally well and got lots of sponsors to help towards the fundraising. 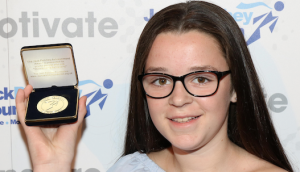 Grace has helped to raise awareness for the group throughout her school, to spread the word about the work they do. She is always coming up with great new ideas to support the group too.

Grace decided to spend her £250 Jack Petchey Achievement Award grant on a trip to Jump Giants for the group.

Grace said: “I feel proud to have achieved this award since not many people know anything about young carers.”

Sir Jack Petchey CBE aged 93, said “I am passionate about our awards scheme which enables young people to be recognised, valued and rewarded for their achievements and positive contributions to society.”