WORLD No Tobacco Day on 31st May brings to attention smoking rates in the East of England as well below the UK average, with around 14% of adults being frequent smokers in the region. 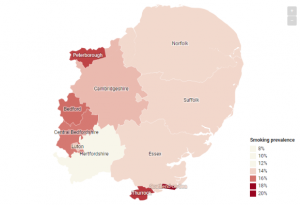 The region has an estimated 45,000 smokers less than the England average (14.9%) for the population (with one percent equivalent to 65,000 smokers).

Hertfordshire is the best performing area in the East of England, with 12.7% of its adult residents smoking. With 13.8% of the adult population smoking respectively in both, Essex and Norfolk are the areas with the joint second lowest smoking rates in East England.

By contrast Southend-on-Sea has the highest percentage of adults smoking at 18%. Southend is followed by Thurrock with 17.7% and Peterborough with 17.6%.

These figures were collated by Vape Club for World No Tobacco Day on 31st May. The data was sourced via information taken from the NHS’ ‘Quit Smoking’ Service and Public Health England. The data provides an insight into the prevalence of smoking within England and the extent to which NHS services have been successful in raising the quit rate.

How to kick the habit for World No Tobacco Day 2019

The New England Journal of Medicine published a recent UK study in which participants were given either traditional nicotine replacements or e-cigarettes instead of the NHS ‘quit smoking’ services. Nearly 1 in 5 people (18%) from the vaping sample quit successfully − in comparison to just 1 in every 10 of those who used alternative nicotine replacement methods.

Official government publications also recommend the use of e-cigarettes to quit smoking for good, citing the approximate 775,000 now former smokers who benefitted from this approach as a testament to how effective such devices are.

Dan Marchant at Vape Club notes:
‘Vaping gives a real alternative to traditional smoking cessation products, and as the study shows they are actually twice as effective. It is fantastic to see organisations such as Public Health England and the NHS embrace the public health breakthrough that is vaping, but we still have a long way to go to get this message out to the remaining 7.4million smokers in the UK.’