In an article in the Independent newspaper, Mr Mackinlay is believed to have left the Liberal Democrats due to disllusionment with leader Jeremy Corbyn and the Labour Party’s stance on Brexit. 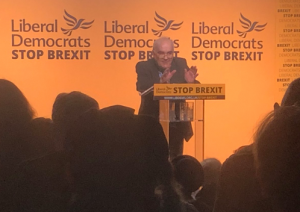 Mr MacKinlay, who was Labour MP for Thurrock between 1992 and 2010 said: “I’ve been a Labour member for 52 years, I’ve been up hill and down dale with the party and we’ve been down in some troughs before, but previously I always thought we would get out of them.”

He let his membership lapse before Christmas and joined the Lib Dems on Wednesday because of the party’s opposition to Brexit, though he has no plans to return to the Commons.

Mr Mackinlay is a freeman of Gibraltar. He told the Gibraltar Chronicle that he intended to vote for the Liberal Democrats.