A POLICE officer from Thurrock was commended by the Chief Constable for saving two lives on two separate occasions, one of which was when he was off-duty.

On Wednesday, May 29, PC Kyle Denning attended a commendation ceremony with his family at Essex Police Headquarters in Chelmsford to celebrate his actions of bravery and courageousness during two dangerous and difficult situations. 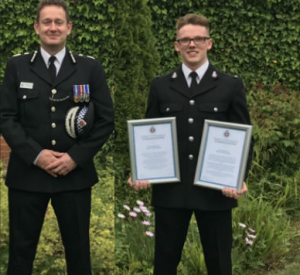 The first incident, Kyle was awarded for was a road traffic collision that he attended with colleagues. In April 2018, Kyle, PC Emma McIntyre-Major and PC Bradley Brown found an elderly man who had been in a road traffic collision in a remote location. The man was unresponsive and our officers immediately began performing life-saving first aid on him. They were performing CPR on him until an ambulance arrived. The man eventually began to breathe for himself and was rushed to hospital to receive the critical care he needed.

Emma, Bradley and Kyle were commended for their dedication, compassion and prompt action which saved a man’s life.

The second incident Kyle was awarded for took place while he was off-duty with his family. They were walking across a footbridge over the M20 motorway with their dog when he saw a woman sitting on the wrong side of the barrier who was intending to jump into the path of oncoming traffic below. Kyle climbed over the barrier and started to talk to the women until local police officers arrived. After speaking with the woman, Kyle and the officers managed to convince her to climb back over the barrier to safety. The woman was taken to hospital to receive medical treatment.

Kyle was commended for his bravery, compassion and determination which undoubtedly prevented a woman from taking her own life.

Chief Inspector Claire Talbot, District Commander for Thurrock, said: “I was pleased I was able to see Kyle collect his well-deserved awards.

“I’m really proud of him for his life-saving actions. He is a credit to the force and the people of Essex that he serves.”

PC Kyle Denning mentioned in this article is a local policing officer in Thurrock, which is one of the many options available to you when you become an officer with Essex Police. We’re currently recruiting police officers to join our police family. Find out if you ‘fit the bill’l by visiting our website: www.essex.police.uk/fitthebill