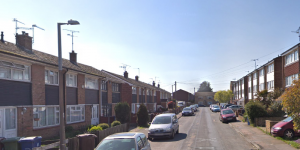 A MAN has had a lucky escape after a fire broke out in his kitchen while he was sleeping.

During the early hours of this morning (Wednesday 5 June) the occupant in Leicester Road, Tilbury began heating a pan of oil on the hob, closed the kitchen door, went into another room and fell asleep.

He then woke sometime later and entered the kitchen to find smoke and flames filling the room.

On discovering the fire the man attempted to extinguish it with water; arguably the most dangerous thing you can do.

“This whole incident could have ended very differently for so many reasons.

“Firstly, there were no smoke alarms in the property meaning the man was not alerted to the first sign of fire, so he is very lucky that he woke up when he did.

“Secondly, if the man hadn’t closed the kitchen door the smoke would have reached him more quickly, possibly before he woke up.

“Finally, the flames could have instantly expanded when he tried to tackle the fire, which is what we would always expect to happen when water is added to a grease fire.

“Any of these factors could have had fatal consequences

“Our number one piece of advice is to fit a smoke alarm on every level of your home, then no matter what happens you’ll be alerted to the first sign of fire.

“Never leave cooking unattended either, particularly when cooking with oil, but if for some reason it does ignite then never use water to extinguish it. Always get out, stay out and call 999.”

Firefighters stayed on scene after ensuring the fire was completely out to fit smoke alarms to the property.

The kitchen has suffered smoke and fire damage.

One Response to "Tilbury: Man escapes kitchen fire after falling asleep while cooking"