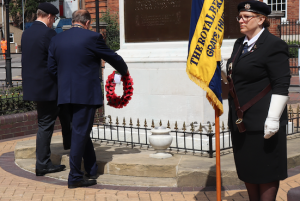 TRIBUTES have been made to soldiers at a special ceremony marking the 75th anniversary of the D-Day Landings.

Grays Thurrock Branch of the Royal British Legion held a commemorative service at Grays War Memorial on Thursday 6 June – exactly 75 years to the day that the Landings took place – to remember the D-Day Landings, the Battle of Normandy and the Battle of Monte Cassino.

Thurrock Council officers and councillors, including the Mayor of Thurrock Cllr Terry Piccolo, his wife and consort Joan Piccolo and Deputy Mayor Sue Shinnick, paid their respects at the event alongside members of the public.

Poppy wreaths were laid on behalf of the Mayor of Thurrock Cllr Terry Piccolo, Leader of the Council Cllr Rob Gledhill and the Chief Executive representing all officers of the council.

Cllr Terry Piccolo, Mayor of Thurrock, said: “It is a great honour to be here today and lay a wreath to commemorate the bravery of all those involved in the D-Day Landings and the Battle of Normandy.

“As many as 4,400 troops died from the combined Allied forces on this day alone. These casualties who died fighting for our country should never be forgotten.”