THE Cobra Sport AmD with AutoAid/RCIB Insurance Racing team will look to enjoy another strong weekend on track when the Kwik Fit British Touring Car Championship heads for Croft for the fourth round of the season. 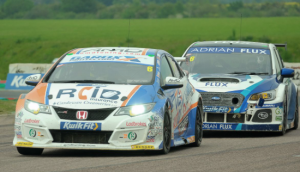 The West Thurrock-based outfit has been one of the real success stories of the 2019 campaign so far, with the decision to switch to a pair of Honda Civic Type Rs seeing the team vault up the order to become genuine front-runners.

The team makes the long trip to North Yorkshire – the home circuit of Sheffield-based title sponsor Cobra Sports Exhausts – having already secured three podium finishes this year, including a breakthrough win at Brands Hatch during the opening meeting of the season.

That win came thanks to Scottish star Rory Butcher, who sits in a share of the championship lead with nine of the 30 scheduled races now complete – and also heads both the Independents’ and Jack Sears Trophy standings.

The 32-year-old is one of only two drivers on the grid to have scored points in every race so far this season and has already surpassed the total he secured across the entire 2018 campaign.

Twelve months ago, Rory secured a hat-trick of points finishes at Croft at the wheel of an MG6 GT, and has fond memories of the circuit having taken his maiden pole and race win in the Porsche Carrera Cup back in 2012.

Whilst the Croft circuit has traditionally favoured rear-wheel drive cars, resurfacing work across the winter could help bring front-wheel drive machines like the Honda closer to the outright pace, with Rory targeting a score of at least 30 points to maintain his challenge against the rapid BMW of defending champion Colin Turkington.

Leeds-based team-mate Sam Tordoff picked up his first podium finish of the season last time out at Thruxton, although there were mixed emotions for the 30-year-old – who saw victory slip through his fingers due to an electrical issue whilst leading race one.

Sam’s pace in the Honda has been clear to see from the moment he stepped into the car for pre-season testing, although bad luck in the opening two meetings of the year at Brands Hatch and Donington Park sees him trying to make up ground in the title race.

The 30-year-old has a strong record at his home circuit, taking pole position and a race win back in 2015 and two further podium finishes.

Currently sitting just outside the top ten in the standings, Sam heads for Croft without any additional success ballast on his car and will hope to replicate the strong qualifying performance he put in at Thruxton – where he snared pole position – before fighting for a big haul of points on race day.

Shaun Hollamby, Cobra Sport AmD with AutoAid/RCIB Insurance Racing team principal, said:
“You only have to look at the results from recent seasons to see how strong rear-wheel drive cars are at Croft and in that respect, this weekend could well be a case of damage limitation for us.

“Whilst the new track surface should help, it’s still going to be a huge challenge to try and take the fight to the BMWs when you consider how fast they have been – and that this will probably be their strongest track so far.

“However, Rory and Sam have picked up strong results at Croft in the past, and we know that both drivers will go out and give it their all from the moment they hit the track. We just have to focus on ourselves and do the best job possible to maintain our strong start to the year.”

Rory Butcher, #6 Cobra Sport AmD with AutoAid/RCIB Insurance Racing Honda Civic Type R, said:
“Croft is a circuit that I really enjoy, and one that has good memories after taking my first pole and wins in the Carrera Cup there with Celtic Speed, who are still supporting my racing to this day.

“We go into the weekend in a fantastic position after a strong start to the season, although that provides us with a fresh challenge because of the extra weight we’ll have to carry when we get to Croft. That’s going to have an impact in qualifying and race one – particularly when it comes to getting the car stopped at the complex – but hopefully as we lose the extra ballast across the weekend, we can challenge for some good results.

“In the first three rounds, my target was to try and get at least 30 points on the board and I’m taking the same approach at Croft, although I don’t think it will be as easy to achieve.

“I’m hoping that the resurfacing work at the circuit will help us and provide more grip, but at the same time, I think the rear-wheel drive cars will still have the edge on us. We’ve just got to stay focused and get as much from the weekend as we can.”

Sam Tordoff, #600 Cobra Sport AmD with AutoAid/RCIB Insurance Racing Honda Civic Type R, said:
“It was unfortunate to miss out on a win last time out at Thruxton but we showed really strong pace and hopefully we can carry that into this weekend.

“Croft is a circuit that has traditionally favoured rear-wheel drive cars like the BMW and the Subaru because the track was so abrasive, but the fact it has been resurfaced over the winter means there will be a bit of a step into the unknown for everyone. Looking at the lap times some of the support series have done in testing, it definitely looks like it will be a lot quicker, and hopefully tyre wear for the front-wheel drive cars will be less of an issue.

“I still think rear-wheel drive cars will have an advantage over us but I’m going into the weekend without any extra success ballast and hopefully I can make the most of that.

“The target has to be to qualify towards the front, and then push for some strong points on race day. The weather could also have an impact but wet or dry, I think we’ll be okay.”

Rachel Abbott, Cobra Sport Exhausts managing director, said:
“It’s been a fantastic season so far for the team and to see the Cobra Sport-backed Hondas fighting at the front of the grid in the first three rounds of the year has been brilliant.

“As our home event, Croft is a weekend that we always look forward to and hopefully Rory and Sam will be able to replicate the strong pace they have shown so far and can challenge for some strong results on track.”