A FIRST-of-its-kind project has already helped hundreds of victims of sexual abuse and rape in Essex get access specialist support more quickly. 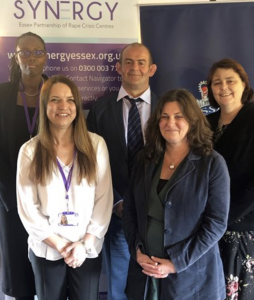 The Synergy Essex First Responders (SFR) scheme is believed to be the only one in the country that gives victims access to support within one working day of reporting an offence to police.

The SFRs are a specially trained team able to provide initial support at the point someone reports a sexual offence to Essex Police.

The pilot project started on January 21 and within the first three months had already helped 279 people, with more than 150 people going on to engage with services.

One person who has benefited from the service said: “From reporting to police to the SFR contacting me was very, very quick.

“It was hard talking but it was good, because I was able to get a lot of things off my mind. I thought the SFR was brilliant, I knew they were helping me and they listened.

“I never realised the support was available. I think the SFRs and the police officers are doing a fantastic job, I don’t know what I would have done without the SFR ringing me.

“I have had very bad mental health for many years, but before I was sexually abused I was a happy normal boy.

“I was sexually abused as a child and raped, I have tried to hang myself about a year ago, I have taken about 20 overdoses, the last one was two weeks before the SFR called me.

“Before the SFR rang me my mind was racing but now I feel calmer, it is their calm voice and they give me time to talk, and helped me understand my feelings and explained how trauma can affect people. I feel my brain would have exploded as I hadn’t heard from the police yet.

“The SFR explained to me that this is why they are supporting me as the police have to do a lot of work because my case is from the past.

“From our last conversation I also had the courage to tell my sister, she was very shocked and asked me if that was why I have taken overdoses. I told her it was.

“It feels better that I have told her and she is going to support me too. I think everyone should know that there is brilliant support for people like me.”

Detective Superintendent Jason Hendy, from Essex Police, said: “Despite our best efforts, before this project victims and survivors may have had to wait two weeks before being referred to specialist rape and sexual abuse support services, which is just too long.

“It takes a lot of courage to report these kinds of offences in the first place and they can have a massive psychological impact on the victim so it’s really important they’re able to get the support they need as quickly and as easily as possible.

“Victims of sexual offences have been through a traumatic experience and if they don’t get the right support it can leave them feeling isolated and unsure of what’s happening.

“This delay can also mean victims disengage from the process and, understandably, want to withdraw from the investigation.

“I strongly support the work of Synergy Essex who are able to provide that support and give victims and survivors’ choices and better outcomes.”

The service is funded by a £136,110 grant from the Police, Fire and Crime Commissioner to help the Essex rape and sexual abuse partnership, Synergy Essex, respond to the increase in demand and offer specialist support from the moment victims report the incident to police.

The grant is in addition to the £680,000 funding provided before the rise in reported incidents.

“We are committed to making specialist services available in a timely way to ensure that those in need of support receive an effective and consistent service.

“We know it can be daunting for victims and survivors to reach out for help and we need to ensure that when they do we make sure we provide them with the right support to cope and recover from the harm they have experienced.

“I am pleased that by working with Essex Police and Synergy Essex we have improved access to support for victims and survivors of these offences.”

Reports of sexual offences have increased both in Essex and across the country.

Rebekah Brant, from Synergy Essex, said: “Synergy Essex First Responders offer support to victims and witnesses at an earlier stage when they report to the police.

“Our extensive experience of working with victims and survivors, has shown that minimising the time it takes to get support has a direct positive impact on recovery and prevention of long-term physical, emotional, economic and criminal justice outcomes.

“Already we’ve had really positive feedback with victims and survivors telling us that having this support really early on has helped them understand the criminal justice process and what to expect in terms of the investigation.

“This has helped them engage with the police and continue to support the investigation.”

Before the project victims and survivors who were unable to support an investigation were not referred to specialist counselling support but that has now changed, meaning all victims have access to specialist support services.

“This initiative goes some way to increase the capacity here in Essex to meet that demand.

“The impact of these crimes can be devastating and navigating the criminal justice system can be a challenge at this time so we need to make sure we do all we can to make this process as easy as possible.

“The Essex PFCC is one of the trail blazers for the Ministry of Justice to show how partnership work, when it effectively includes specialist rape crisis services, increases support to victims who contact Essex police”.