Orsett cricketer is pretty in pink

TERRY Hills coaches an all girls team at Orsett & Thurrock Cricket Club in Essex playing in the local U13 league called the Amazons. There’s not much that Terry doesn’t know about coaching and motivating young cricketers. But when during Winter training he told Amazon Grace Shepherd, a middle order batswoman, that if she hit a six in a match this season he’d dye his hair pink, he probably didn’t release just how motivated the young teenager would be to do just that! 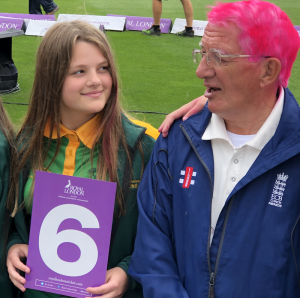 The Amazons met an all boys team, the Trojans, on Sunday 9th and Grace struck the third ball she faced beautifully, to send it sailing over umpiring Terry’s head and well over the boundary. Terry was forced to signal the six that sealed his pink fate before burying his head in his hands, whilst the Amazons and parents celebrated with a little more gusto than normal, in front of the somewhat bewildered Trojans who went on the win the game by 6 points.

“It was no ordinary shot from Grace, a moment of technical brilliance. It was fantastic to see all the hard work during Winter training pay off” said Terry. “I’m so proud of all of the girls that I coach and I was happy to honour my agreement”.

The timing of the achievement could not have been better, as Terry took the Amazons to see England ladies take on the West Indies in Chelmsford on Thursday sporting his pink hair flanked by the Amazons in their all green strips, as the TV cameras panned around for interesting crown scenes, they couldn’t fail to notice the 71 year old and his young team. During the game there were several glimpses of the party beamed around the world.

The England ladies completed a 3 – 0 series win against the West Indies and to round the day off perfectly, Chafford Hundred resident Grace and her teammate, a fellow Harris Academy Pupil, Emily Hart got to be part of the presentation party, presenting the medals to the victorious England team.