HIGHER prices for medicine, a decimated manufacturing industry and a loss of jobs – these are among the consequences of a no-deal Brexit, according to a campaign group. 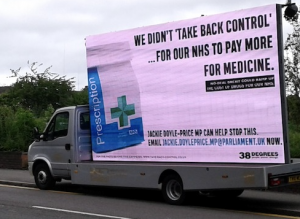 The warnings were all around Thurrock this weekend as the borough was used as the launching pad for a nationwide campaign that aims to highlight the impact of a no-deal Brexit on daily life in the UK.

The group 38 Degrees says 10,000 homes received leaflets publicising the impact of a no-deal Brexit on the NHS, and a mobile billboard was driven around the town centre.

Thurrock has been one of the most fiercely pro-Brexit regions in the UK with 72 per cent of voters wanting out.

But with parliament continuing to be at deadlock over the issue, there are fears that the country will leave the European Union without a deal.

During television debates between candidates wishing to replace Prime Minister Theresa May, former Brexit Secretary Dominic Raab said the UK could “manage those risks” associated with leaving without a deal, while Home Secretary Sajid Javid said it is the “last thing” he wants.

International Development Secretary Rory Stewart was the only one to rule it out entirely, calling no-deal Brexit “complete nonsense” that would harm the economy.

Boris Johnson, who is the current frontrunner for the job, did not take part in the TV debates and there has been speculation that he is reluctant to engage with the media because he would be unable to explain how he would achieve no-deal Brexit without causing harm to the country.

Ellie Gellard, campaigns director at 38 Degrees, said: “A no-deal Brexit could see our NHS struggling to pay more for vital medicine, our manufacturing industry decimated and British workers losing their jobs. Whether we voted leave or remain, no one voted for this.

“As we speak, MPs including Jackie Doyle-Price are deciding who could be our next Prime Minister. With so much at stake, it is vital that the public’s voices are heard.”

The campaign group is urging Thurrock residents to write to their MP to voice concerns about leaving without a deal.