Village Green to host brilliant line up of DJs

ARTS organisation Metal’s popular family-friendly festival Village Green on Saturday 13 July hosts a brilliant line up of DJs this year to compliment the live music acts and the many stages and spaces around the festival.

Covering a huge range of genres, there’ll be a tune playing somewhere in Chalkwell Park for everybody’s taste.
Village Green welcomes DJ Andy Bush from Absolute Radio to play a special guest spot. Andy has recently moved to Leigh-on-Sea. He has five Radio Academy Award nominations under his belt and has interviewed some of the biggest names around like Muse, Sir Mick Jagger, Keith Richards and Ricky Gervais. He’s also an accomplished writer and doodles pictures of celebrities doing mundane things in his ‘Celebs at Home’ series. He plays on the main stage at 6.40pm before the Fun Lovin’ Criminals play live. 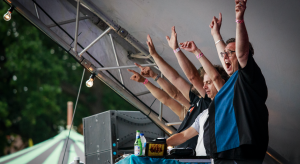 Festival regulars and popular local collectives Middle Age Spread and Urban Allstars will be on main stage duty during the rest of the day guaranteeing the expected feelgood vibe between all of the acts. Middle Age Spread specialise in grown up disco for those unafraid to dance, consistently playing sold out events. Urban Allstars have been throwing down the funk longer than they care to admit and both MAS and UAS have eye-wateringly eclectic record collections at their command to play at Village Green.  Making a first appearance at Village Green this year is the Silent Disco presented by Southend record shop TwoTwelveTens, promising sets from regional and national DJs. Aimed at all ages: families and young people, headphones are provided and various channels play different genres that will get everyone dancing.

Blow Up, the ground-breaking club night at the centre of the 90s Britpop explosion and now a record label and music publishing company, is currently celebrating its 25th year and to mark this anniversary, its founder Paul Tunkin, returns to DJ in Southend where everything musical began for him. Paul will play the Idea 13 stage, spinning sounds from Blow Up alongside tracks from his earlier Southend clubs: the Monkey House, Wasp Factory and the Periphery.

Also on the Idea 13 stage, long established, local digital radio station Ship Full of Bombs will showcase the female DJs who present shows on the station including writer Zoe Howe and folk singer Diana Collier. Presenters from new community station Ray Radio will be stepping up to the decks too. The live performances on the Idea 13 stage have been programmed by a panel of music industry professionals.

In other spaces across the Park, Baxter:Collier:Baxter (brothers Keith & Richard Baxter and Paul Collier, all stalwarts of the Leigh Folk Festival), will be delighting visitors to the Decca90 exhibition in Chalkwell Hall, with a selection of classic Decca tunes on 78’’ discs. Young hip-hop DJ, producer and rapper Harrison Lemaitre appears on the Oak Stage and events collective ResisDance DJs, a diverse group of women and non-binary people will be taking hold of the tech and decks in the Grrrl Zine Fair.

Tickets for Village Green are on sale now. As in previous years, 500 free tickets are available to holders of Southend Council’s Advantage Card C. These can be picked up from the Southend Borough Council reception – just have your Advantage Card C ready to show.

TICKETS NOW ON SALE from www.villagegreenfestival.com