THURROCK Residents have shown their anger at plans to spend £10million on redeveloping council offices in Grays by holding a protest outside the Civic Centre. 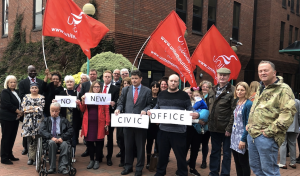 It was led by Labour councillors ahead of council meeting where there will be a discussion over whether to scrap the controversial plans entirely.

Speaking at outside the council offices, Councillor Jane Pothecary, leader of Thurrock Labour, said: “I hope tonight the Tories will pause, listen to the people and reflect on what they have to say. They need to think about whether in this time it is prudent or appropriate for a building like this that only serves councillors.

She went on to say that if the motion fails, councillors will have to demonstrate to the administration how widespread opposition is within the communities, adding that when going door to door it is raised by almost every resident.

It was revealed this week that if the plans were abandoned the council would lose at least half a million pounds, which has already been spent on “the development of concept designs” and “surveys and architectural work”.

Further costs would be incurred from having to pay a contractor compensation. The council has refused to say how much this would be, claiming it is “commercially sensitive”.

Members of the Thurrock Independents have urged the council to produce a business case that will show the financial benefits of the scheme but so far, nothing has been produced.

The Tories claim the new offices will be an “inspiration” to other businesses in Grays and have promised that residents will be able to hire out certain rooms for events. They also claim that it will provide a better venue for those wishing to get married at the registry office.

The redevelopment will result in an extension to the civic offices being built on a small park dedicated to the memory of D-Day planners, as well four independent businesses.