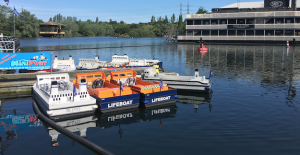 The boats, which have been at the centre for the past four weeks, have been extremely popular among customers. intu Lakeside’s charity partner, Little Havens Hospice, also took part in the official opening enjoying a ride around the lake with RNLI staff.

On the day, representatives from Little Havens along with the RNLI cut the ribbon to the new miniport boats. Branch Secretary & Press Officer at RNLI Thurrock & District Fundraising Branch said: “It was a pleasure to officially launch the miniport ships with Little Havens and it was great to see all the intu Lakeside staff come together to support.”

Zoe Butler, Community Fundraiser from Little Havens Hospice said: “Our partnership with intu Lakeside is absolutely fantastic! It was great to attend the launch and experience the different activities they have to offer children. 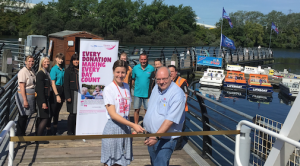 “We are thrilled that intu Lakeside are so engaged with Little Havens families and the opportunities they create, we are beyond grateful.”

Ben Leeson, Marketing Manager at intu Lakeside said: “This is a great attraction for our customers at intu Lakeside and we are honoured to have the RNLI and Little Havens Hospice with us at the official launch. We want to give our customer the best experiences possible and having such an adventurous activity on the Lake helps us to do so.”

The boats cost £10 to hire for 15 mins and are opened from10am – 6pm weekends and school holidays.