SEVENTY-three new police officers are ready to police the streets of Essex after the biggest intake of officers in Essex Police’s modern history officially swore their oaths to protect and serve Essex. 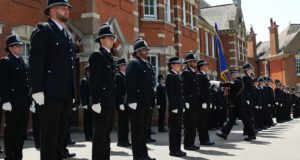 They were welcomed into the force by Chief Constable Ben-Julian Harrington. Deputy Police, Fire and Crime Commissioner for Essex Jane Gardner and James Bettley, High Sheriff of Essex.

The 73 officers, split into Intake K1, K2, K3 and K4, have been put through their paces over the last 18 weeks as they trained to become Police Constables.

After pledging their commitment today to serve the residents of Essex, they will be posted across the county to protect your local community.

Our new recruits will continue their training on the beat with different teams in the force including local policing teams, domestic abuse teams and child abuse investigation teams.

In his third and biggest passing out parade as Chief Constable, Mr Harrington read out messages of congratulations from the families of some of the officers and congratulated the team on behalf of the wider force.

He said: “It’s a big day. A very big day. Nineteen weeks after I welcomed you all to the Essex Police College, you are now part of the biggest passing out parade in the modern history of Essex Police – 73 officers and I am proud of every one of you.

“Policing in Essex as we know it dates from 1840 and people like you have been passing out on this ground since the early part of the 20th Century. Policing has got busier since then, but at its core and in our heart, policing still does the same thing. You help people, you protect vulnerable people and you catch criminals.

“I have no doubt that the careers you make will be successful. If you are curious, challenge yourselves, work as a team and always look to learn, there are endless opportunities for you because you’re in the best job in the world.”

During their training course to become Police Constables, the students collectively raised almost £10,000 for charity.

Students in Intake K1 and K3 raised £4,191.60 for Hope for Grace, a fund set up for Grace who is the daughter of two serving Essex Police colleagues. Grace is 1 of just 20 people in the world who suffers from a gene mutation which is heavily linked to epilepsy.

Cheques were presented by each intake to representatives from the charities during the ceremony.

Recruitment for police officers is currently open. Do you want to work in a unique role where every day could be different? Apply online today at www.essex.police.uk/fitthebill