CHIKTOPIA, the better chicken concept, has announced that it will open its first site at the multi-million-pound extension of shopping destination intu Lakeside in late July. 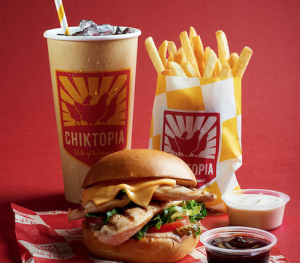 The new fast food restaurant, with a focused menu of tasty grilled and fried chicken, is the vision of two chicken nerds whose obsession with great chicken led them on an adventure in 2018 to the Deep South of America in search of chicken nirvana. In New Orleans they discovered some of the best chicken they had ever tasted and it was there that they hatched their new concept.

The first Chiktopia will lie within the heart of the new intu Lakeside scheme and offer around 120 covers, trading Monday to Sunday, breakfast till late. It will serve up fried & grilled chicken burgers and tenders, skinny fries, salads, wraps, vegan and veggie options, thick dairy shakes and unique Louisiana biscuits.

Chiktopia is led by Alastair Gordon, formerly of Ole & Steen, and advised by a group of senior industry figures including Dan Einzig, founder of Mystery Design, Mark Lilley, CEO of Abokado and Richard Morris MD of Tortilla.

Alastair Gordon said: “We’re so excited that Chiktopia will be opening soon. A huge amount of work has gone in over the last few months, all focused on giving British consumers the best possible chicken experience imaginable.

“Intu Lakeside, with its mix of couples and families and driven by both state-of-the-art leisure experiences and a well-established retail destination, is the perfect platform on which to demonstrate the broad appeal of our brand and our philosophy of fast food to feel good about.”