Man has car seized after fly-tipping in South Ockendon

A MAN has been fined and his vehicle seized after being caught on CCTV fly-tipping in South Ockendon.

Eight bags of household rubbish were dumped at the roadside in Dennises Lane at 1.30am on Sunday, 30 June.

The offence was reported to Thurrock Council and swiftly investigated. 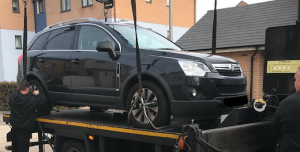 A car was this morning (Wednesday, 10 July) seized in connection with the fly-tip and a Thurrock resident was interviewed and subsequently fined £400 and ordered to pay £220 costs. The resident has already paid in full and the vehicle will now be returned.

Leader of Thurrock Council, Cllr Rob Gledhill said: “The cost of clearing up fly-tipping is picked up by the hardworking taxpayer and is money that could be better spent on services for our residents.

“We have been very clear that fly-tipping is not tolerated in Thurrock and this case demonstrates that we are watching and will continue to take action against those who commit this selfish crime.

“Fly-tipping tarnishes the borough, hampers some of the excellent work that is happening to make it a great place to live, and there is absolutely no excuse for it. We have weekly waste and recycling collections in Thurrock, a household waste and recycling centre that is open 362 days a year, and have invested about £8million in improving our environmental services further.

“I would like to thank the resident who reported this offence to us and reiterate that we will use all of the powers available to us to tackle fly-tipping.”