IN a change from our advertised programme, at our last meeting Susan Yates and Scott Sullivan, directors of the Tilbury on Thames Trust, gave us an illustrated talk on the history and future of Tilbury Riverside. Susan began by telling us that it was set up by the Port of Tilbury at a cost of £3.5m. The station opened in 1854 and was originally called Tilbury Fort Station and ran from Ilford to Tilbury Fort via Barking and Purfleet, en route for the popular destination of Gravesend. 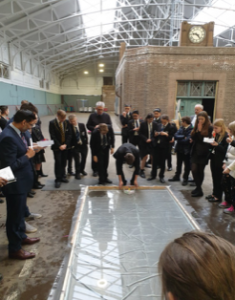 In 1882 work commenced on Tilbury Docks, when Mesolithic man was discovered there amidst the marshy ground. The docks opened in 1886, when the line was extended from Fenchurch Street to Tilbury.

The station and landing stage are Grade II* listed, designed by the PLA architect Sir Edwin Cooper. The booking hall and station with several platforms were completed in 1924, eventually closing in November 1992. The Tilbury Marine Station was within the docks and serviced boat trains; it ran from 1927 to 1932.

After WW1 the number of passengers increased, Tilbury becoming the port for passengers to London. In 1920 work began on the floating landing stage which rises and falls with the tide. It was opened in 1930 by PM Ramsay MacDonald and renamed London Cruise Terminal in 1985. However, it closed in 1990, only to open again in 1995 as a cruise facility. Many famous people have passed through its doors, including Mark Twain, Gandi, George Orwell, William Morrison and Baden Powell. 1939 saw evacuees embarking, with the £10 POMs to Australia in 1947. And of course there was the Empire Windrush coming in 1948. In 1956 Winston Churchill and his wife sailed, Donald Campbell with his Bluebird the following year. Several ships now use the terminal, the largest carrying 3500 passengers.

Scott illustrated what the future could bring through the Tilbury on Thames Trust. He said the Thames features in many of our lives. His early memories of it are the Woolwich ferry as a child and the new bridge (which he tried copying using Lego and car tracks). The Trust focuses on heritage prospects and funding, Tilbury influences many people, linking us to the rest of the world. The Trust was formed in 2016 to look into the benefits and commercial usage. It is a partnership between the local area and the docks. £1m has been raised, with Jonathan Catton playing a role in starting it up. It is one of his many legacies to the borough, working with the Port of Tilbury in partnership for its regeneration.

The Heritage Lottery Fund will provide jobs, transport and logistics, Tilbury being a major employer. Its objectives are to restore the site and celebrate heritage, working with Tilbury Riverside Project. The booking hall will form part of the Tilbury carnival in July.

We saw the state of the buildings, Scott outlining what still needs to be done. The cladding and windows of the landing stage are in poor condition, but the decking has now been restored by the Port of Tilbury. The rolling gantry is still used today and some internal original fittings are still in good condition. As to the cruise terminal itself the existing roofs need attention, although the cupola has recently been restored. It is cathedral-like, a huge area which needs damaged windows and brickwork replaced.

The Riverside Station roof has now been replaced and the old cafe restored to house a training simulator, helping ex-servicemen and women back to work through the logistics sector. The internal roof lights and ticket office need attention, there is no heating but the toilets are Art Deco and in good condition.

In conclusion, the building is structurally sound and can tell a story. The terminal needs to generate an income and since 2015 cruise ship visits have doubled. In the future it could stay as a cruise terminal, host events such as markets, introduce a heritage zone or rent out smaller rooms as artisan studios, maybe a small cafe. As a Trust it is committed to heritage but construction costs would cost several £m. To finish, Scott showed a marvellous video, some of it taken from the air, showing the structure of the site and clips of previous events. A very interesting and informative evening.

Our next meeting is at the Adult Education Centre in Richmond Road, Grays on Friday 20th September, when Dennis Parker will be speaking about his time as a magistrate. Visitors are most welcome.