A LIVE broadcast of the award-winning Fleabag will be coming to the big screen in Vue Thurrock this September courtesy of National Theatre.

The one-woman play, written by and starring Phoebe Waller-Bridge, was the inspiration for the phenomenally successful BBC television show of the same name, and has now returned to the West End after a sold-out New York run. 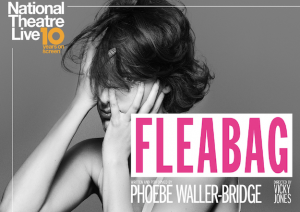 As well as the successful play and series, Waller-Bridge has written the spy thriller Killing Eve and is currently working on the next James Bond instalment.

National Theatre Live: Fleabag is a hilarious, rip-roaring look at some sort of woman living her sort of life and will be broadcast live from London’s West End to Vue screens across the country in top quality picture and sound.

Johnny Carr, Event Cinema Manager at Vue UK and Ireland, said: “After the huge success of the TV series Fleabag, we’re delighted that the play that started it all is back on stage and coming live to Thurrock thanks to our partnership with the National Theatre. We’re sure that big screen audiences will be laughing and cringing in equal measure at National Theatre Live: Fleabag, which is set to be incredibly popular, so we would advise booking early to avoid disappointment.”

National Theatre Live: Fleabag will be shown live at Vue Thurrock on Thursday 12th September. Tickets are out now and can be booked at www.myvue.com.