THOUSANDS of pounds have been raised following a Charity Football Match between the Essex County FA and Palmers FC to raise money for stillbirth and neonatal death charity, Sands, and CALM, the Campaign Against Living Miserably. 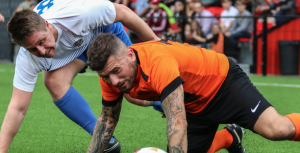 The well-attended match on Sunday 14th July at Bowers & Pitsea FC featured a dramatic penalty shootout finish, a hugely-supported raffle and various other festivities. The match itself finished 1-1 at full time, with Palmers winning 4-3 on spot kicks.

Organiser Sean Harris explained: “It was a brilliant event to raise fund for two excellent causes. I chose Sands to represent as, unfortunately, a friend of mine lost twins in May. CALM are also close to my heart as a friend of a friend committed suicide in 2018.”

“There are so many people to thank for the success of the match. Our hosts, Bowers and Pitsea FC, and the match officials, Joe Gray, Grant Conway, Charlie Duggins and Jamie Wood. I’m really grateful to Palmers FC for playing us and supporting the match, to Jacques Feeney for taking the photographs and to Michael Barnard from Bowers for his donations.”

Essex had a great early chance after Luke Hornsley was fouled in the box, but Asif Chaudhery saw his penalty saved by goalkeeper Garron Price. However, the County FA then took the lead in the first half against the run of play through Hornsley, and the score stayed 1-0 at half time.

In the second half, Essex ‘keeper, and Man of the Match, Rhys Elmer fouled Lee Henry, but made up for it with a save from Price from the resulting penalty. Palmers pinned Essex back throughout the second half and got their equaliser with a header from a corner. There were great saves in the shootout and Samuel Woolley missed the final penalty to hand the win to Palmers.

Thank you to the raffle donors: