THE Borough’s two oldest rivals, competed for the Stan Veness Trophy on a wet afternoon at the EMR Stadium on Saturday and for the first time in many years, the sides shared the trophy, following two second half goals reports the Thurrock Independent.

In a tetchy opening, both sides had plenty of possession, with goalmouth action at a premium.

On 27 minutes Tilbury were reduced to ten men when Sam Carter was adjudged to tackled with a high foot and was dismissed.

Despite the man advantage, both sides served up entertainment in a competitive encounter.

The deadline was broken two minutes after the break when Tony Stokes found the net after a shot was parried by Conor Wheatley to give Grays the lead.

Tilbury continued to be in the game and felt unlucky not to draw level on two occasions when defenders Darren Philips and John Easterford both struck the woodwork.

With time running out, it was Tilbury who finished strongly with Aromolaran again going close.

At the final whistle, Captains Lewis Dark and John Easterford were presented with the Stan Veness Trophy from Val Pepperell (pictured). 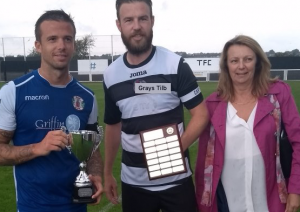 Tilbury are back in action on Tuesday night (30 July), when new ground-sharers Hashtag United play their final pre season fixture at Chadfields. 7.45pm kick off. Grays will be at home (Parkside) on Wednesday (31 July) to Kingstonian.

East Thurrock United also had a man sent off in their friendly at Great Wakering Rovers.

Ben Marlow saw red in the first half for comments made to the referee.
However, the ten men dominated much of the game and were rewarded with a winning goal late in the day from Frankie Merryfield.

Next Saturday the Rocks will play a friendly at Aveley, who ended their Saturday excursion at Hythe Town 0-0.