THURROCK Council is ramping up its zero tolerance stance to fly-tipping by tackling notorious hotspots in the borough.

More than 500 fly-tips have already been cleared in Thurrock since the start of April, with the council issuing 39 fixed penalty notices during the same period.

In a further effort to tackle the problem, flyers are being sent to residents living in William Street and Clarence Road in Grays; Christchurch Road and Darwin Road in Tilbury; and Kings Parade, Stanford-le-Hope, as well as surrounding areas, encouraging people to report any information they have about fly-tipping. Environmental Enforcement officers will patrol these hotspot areas and issue £400 fines to offenders or prosecute through the criminal courts. 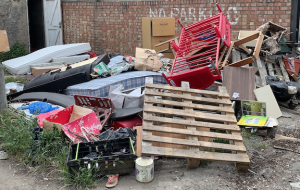 New signs will also be displayed in locations across the borough where fly-tipping has been dumped and an offender has subsequently been fined. These measures will help reinforce the message that the council is taking tough action to tackle the problem, and also act as a further warning to would-be fly-tippers.

Leader of Thurrock Council, Cllr Rob Gledhill, said: “We have been very clear that fly-tipping is not tolerated in Thurrock and we will continue to take strong action against those who commit this selfish crime, including seizing their vehicles.

“To be as effective as possible in doing that we need people’s help and I would encourage residents to be our ‘extra eyes’ in catching those who blight our borough. We will be using our CCTV system to catch people in the act and asking residents to help us identify anyone caught on camera.

“The Linford Household Waste and Recycling Centre is open 362 days out of the year and we provide weekly household rubbish, recycling and garden waste collections, so there really is no excuse for hard-working taxpayers to have to pick up the bill for clearing up fly-tipping.”

To further support recycling services, the council’s bulky waste collection service has been expanded from today. The trial scheme, which will run until Friday, 1 November, allows residents to choose from 74 different slots a week – an increase of 40 in total – using the online My Account service.

Cllr Aaron Watkins, Cabinet Member for Environment, said: “The bulky waste collection service is an efficient way of disposing of rubbish and by doubling collections for this trial period, residents will find it even easier and more convenient to dispose of bulky waste. We hope it will also have a knock-on effect in reducing fly-tipping.”