THURROCK’S biggest shopping centre could undergo a major transformation that would include the creation of a new bus station, a multi-storey car park and a town square.

The ambitious plans for intu Lakeside include demolishing part of the Debenhams department store to make way for an outside shopping area, as well as the creation a new ‘town square’. 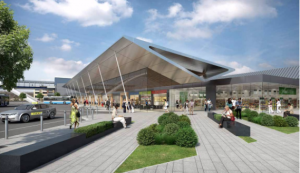 The details have been revealed in a planning application submitted to Thurrock Council and while changes are possible following a review by the council’s planning officers, Intu has said it is prepared to invest up to £168million into the improvements.

Along with the new street-style shopping area on the north side, the existing bus station could also be knocked down and replaced with a new three-storey department store. The existing Debenhams store would then be converted to accommodate several new shops.

It is not clear what the future would be for Debenhams in Lakeside, however an intu spokesperson said: “We are in the process of renewing our planning consent, once that consent is in place we can review where we can go from there.”

Planning documents state that additional stores and changes to the shopping centre’s layout means a new multi-storey carpark will also need to be built to the north of the new department store.

Close to the car park will also be the new town square. This public space will be a small area free of cars that can be used for art installations and seating areas.

To make up for the loss of the bus station, a new and modern replacement will be built at the opposite side of the shopping centre, close to the footbridge that connects to Chafford Hundred Station.

In the plans, it says that repositioning the facility to a more central location that is better connected to the railway station is “an obvious benefit not just for intu Lakeside but for the Lakeside Basin as a whole”.

The bus station will also allow intu to create a “sophisticated and welcoming concourse” entrance that will be seen by shoppers arriving on the bus.

If the proposals are given the go-ahead by the council, intu estimates that it will lead to the creation of up to 1,553 temporary construction jobs during the three-year construction period.

Once completed, there will be up to 2,930 additional jobs at the centre.