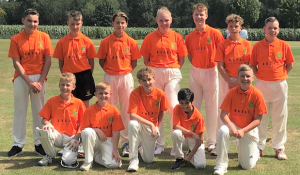 BELHUS commenced their fifteenth youth tour at the picturesque Garboldisham ground. Skipper Teddy Waters lost the toss and were asked to field. Tyler Robertson struck the first blow of the tour bowling the dangerous Cunningham for 6 in a lively spell of 1-13. The Belhus hero with the ball was their youngest tourist Under 11 Rhys Williams who took 2 for 17. Sammy Fairweather bowled with vigour to take 1 for 3 as the hosts totalled 155-5 from their 30 overs led by Elliot Hart who retired for 51 and Jack Whitlam who contributed 37 not out.

Belhus’s start was plagued by frequent wicket losses. Fairweather, Owen Williams and Teddy Waters all made starts as they reach 10 apiece but a Belhus victory looked unlikely at 76-6. Enter Alex Blake who hit a blistering 51 off just 24 balls with a startling 11 fours. Brother Lewis made 20 not out and with the help of Robertson’s 12 not out – Belhus reached their target with six overs to spare. Oliver Lambert was the pick of the home bowlers with 3 for 11 supported by Ben Butler with 2 for 11. A good start to the tour for Belhus on a glorious sunny Norfolk afternoon.

Belhus moved onto Norwich CC for game two of their tour, Henry Overy won the toss for Belhus and elected to bat. Runs flowed as Lewis Blake (34), Teddy Waters (32) and the in form Alex Blake (37) all made hay and a fine last wicket stand of 27 between Sammy Fairweather (17 not out) and Zoran Suneel (9 not out) lifted Belhus to 182-9 from their 30 overs. Enoch Uthayarajan with 3 for 14 and Jack Livermore with 2 for 26 were the home sides most successful bowlers.

In the field, Belhus were electric. Tyler Robertson made a fine run out in the first over and the tone was set. Zoran Suneel (1-7), Owen Williams (2-9), Izzy Overy (1-4) and Henry Overy (1-15) all bowled tidily to take wickets and Norwich were struggling at 73-6 from 24 overs when rain ended proceedings. Uthayarajan top scored with 18. It was agreed Belhus were the victors on a higher scoring rate.

Belhus were invited to bat at Old Buckenham. They were indebted again to Alex Blake who made a fine 61 not out as they were bowled out for 171. Zoran Suneel made 15. Stephenson and the Everitt brothers took two wickets apiece.

In reply Bucks made 114 for the loss of seven wickets from their thirty overs as Belhus were again tight and economical. Nathan Muggeridge made a compact 50 before retiring as Sammy Fairweather 2 for 6, Alex Blake 2 for 11 and Henry Overy 2 for 11 were the wicket takers as the tourists won by 57 runs. As a footnote, Brandon Millard who fielded as a substitute pocketed two fine slip catches.

Belhus lost their first fixture of their three Norfolk youth tours a record reaching back to 2017 as they were pipped in a tight encounter at Topcroft. The tourists batted first making 157 for 7. Sammy Fairweather top scored with 35 and there were good contributions from Ted Waters (33) and Henry Overy with 28. King (2-14) and Collins (3-17) were the pick of the host attack.

In reply Reeder (26) and Roberts (39) led the way but fine catches by Tyler Robertson and Izzy Overy kept them in check. There were wickets for Owen Williams, Rhys Williams, Alex Blake, Henry Overy, Aidan Fourie and Tyler Robertson as Belhus worked incredibly hard to get a victory but Reader’s 14 not out was vital as Topcroft crept home by three wickets.

Belhus rounded off their tour at Brooke and District CC. The hosts proved to be a strong side by posting 215 for 6 from 30 overs. Lewis and Reynolds retired with 50’s and Grove made 29 not out. Belhus bowled as well as they could with wickets for Tyler Robertson, Aidan Fourie, Sammy Fairweather, Owen Williams, Zoran Suneel and Henry Overy. The tourists looked tired as several catches went down but their effort could not be faulted. Substitute fielder Brandon Millard pocketed his third slip catch of the week.

Belhus did not roll over with the bat and young Under 12 Zoran Suneel made a fighting 46 opening the batting, his highest personal score. Alex Blake rounded off a great week with 33 while Ted Waters scored 18 and Henry Overy chipped in with 16 as Belhus totalled a respectable 166-7 from their 30 overs. Belhus lost by 49 runs but were certainly not disgraced.

So ended a fine tour. The Belhus club management would like to thank all the players, parents and match officials who made this tour possible, with special thanks to the club’s youth tour sponsors, being Kushi Restaurants, Trunk Logistics, Mardyke Rotary Club, Ashley Bennett Estate Agents and The Laundry Basket.

Football: Grays hit four to go through in FA Trophy